Danger Mouse is a British animated television series produced by Cosgrove Hall Films for Thames Television. It features the eponymous Danger Mouse who worked as a secret agent and is a parody of British spy fiction, particularly the Danger Man series and James Bond. It originally ran from 28 September 1981 to 19 March 1992 on the ITV network.

The series spawned a spin-off show, Count Duckula, which aired between 1988 and 1993, and an updated series, under the same name, began airing in September 2015 on CBBC. 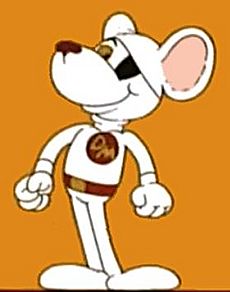 Danger Mouse, as seen in the title sequence. 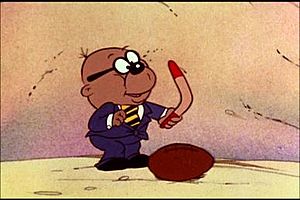 Penfold in
"The Odd Ball Runaround".

Brian Cosgrove described Jason's portrayal as "His voice had the perfect mix of forcefulness, humour and gentleness. He was totally committed to doing voiceovers for silly cartoons, which warmed my heart, and we became great friends." Jason said "I wanted to make him sound believable. We decided he would be softly spoken, very British, very heroic, but also a bit of a coward. He’d save the world, but he’d also run for it!"

Brian Cosgrove came up with Penfold's character design when he was waiting for a meeting with Thames Television, and had drawn up "this little fellow with heavy glasses and a baggy suit" and then realized he had drawn his brother Denis, who worked for the Sunday Express and "who was bald with heavy black glasses".

In 2012, Brian Cosgrove received a Special Award from the British Academy Children's Awards.

A long-running comic strip adaptation, written by Angus P. Allan and illustrated by Arthur Ranson, ran in Look-in magazine and was syndicated in various other magazines. Ranson also provided some backdrops for the show. Allan and Ranson's work was highly appreciated by Cosgrove Hall, and the pair were awarded an "Oh Goodness!, Oh Crikey!" award in appreciation of their services. Some of Allan's stories were adapted for the show, although Allan's name was misspelled "Angus Allen". Artist Ranson later went on to illustrate Judge Anderson in the UK comic 2000 AD.

Two mobile games were published by ZED Worldwide; Danger Mouse: Quiz in 2010 and Danger Mouse in 2011.

Some stories were also available as read-along cassettes with accompanying books. They were re-read by the cast for audio.

During its run, the show spawned a wide range of merchandise, including storybooks, hardback annuals, jigsaw puzzles, a Panini sticker album, View-Master reels, and of course, VHS releases. In the years since, products have continued to sell, often aimed at the now-adult audience which grew up with it, such as T-shirts, mugs, key rings, fridge magnets and posters. To coincide with the 25th anniversary, Cosgrove Hall also licensed rights to a number of companies to produce a range of new anniversary merchandise including Blues Clothing (women's and girls' underwear and sleepwear) and Concept 2 Creation (collectible figurines).

FremantleMedia launched a webshop run by Metrostar e-commerce where a wide variety of goods were for sale, including the CD Audio adaptation of two of the show's episodes using the original artists voices, released by Steve Deakin-Davies: The Ambition Company.

It was reported in 2013 that the series was under consideration for a revival, and in June 2014 it was announced that a new series was being made for broadcast on CBBC in 2015. The new series is produced by Boulder Media for FremantleMedia Kids. It is directed by Robert Cullen with Brian Cosgrove, one of the original creators, acting as creative consultant. Alexander Armstrong and actor Kevin Eldon voice Danger Mouse and Penfold, respectively; Dave Lamb takes the role of the narrator, whilst Stephen Fry plays Colonel K and Ed Gaughan takes over as Baron Greenback. Armstrong's Pointless co-host Richard Osman appears in the series as Professor Strontium Jellyfishowitz. John Oliver voices the character Dr Augustus P Crumhorn III and Lena Headey voices the character Jeopardy Mouse, a character newly introduced into this series. This series will be aired on Netflix in the US. Kevin Eldon describes the animation style as 'much the same as the original'. The first episode aired on 28 September 2015.

All content from Kiddle encyclopedia articles (including the article images and facts) can be freely used under Attribution-ShareAlike license, unless stated otherwise. Cite this article:
Danger Mouse (1981 TV series) Facts for Kids. Kiddle Encyclopedia.