Kids Encyclopedia Facts
This page is about the toy. For the cartoon vehicle, see Danger Mouse (1981 TV series). For the fictional character, see Flatterland. 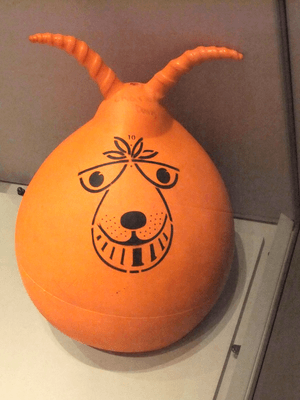 A space hopper (also known as a moon hopper, skippyball, kangaroo ball, bouncer, hippity hop, hoppity hop, sit and bounce, or hop ball) is a rubber ball (similar to an exercise ball) with handles which allow one to sit on it without falling off. The user can hop around on the toy, using the elastic properties of the ball to move forward.

The space hopper is a heavy rubber balloon about 60–70 centimetres (24–28 in) in diameter, with two rubber handles protruding from the top. A valve at the top allows the balloon to be inflated by a bicycle pump or car tire pump.

A child can sit on top, holding the two handles, and bounce up and down until the balloon leaves the ground. By leaning, the driver can make the balloon bounce in a particular direction. In practical terms, this is a very inefficient form of locomotion, but its simplicity, ease of use, low cost and cheerful appearance appeal to children.

All content from Kiddle encyclopedia articles (including the article images and facts) can be freely used under Attribution-ShareAlike license, unless stated otherwise. Cite this article:
Space hopper Facts for Kids. Kiddle Encyclopedia.