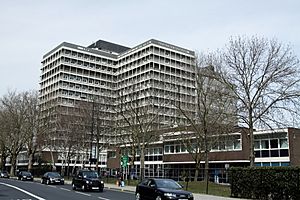 It was originally built in Central London but it was moved after World War II. It reopened on Fulham Palace Road in 1973. The hospital was designed and built by Decimus Burton. It was built much bigger and more modern than others at the time. Today it is still in use. It is also a teaching hospital for students. It has 15 floors.

All content from Kiddle encyclopedia articles (including the article images and facts) can be freely used under Attribution-ShareAlike license, unless stated otherwise. Cite this article:
Charing Cross Hospital Facts for Kids. Kiddle Encyclopedia.