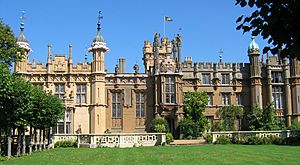 Knebworth House is an English country house in the parish of Knebworth in Hertfordshire. It is a Grade II* listed building. Its gardens are also listed Grade II* on the Register of Historic Parks and Gardens. In its surrounding park is the medieval St. Mary's Church and the Lytton family mausoleum.

The grounds are home to the Knebworth Festival, a recurring open-air rock and pop concert held since 1974.

The home of the Lytton family since 1490, when Thomas Bourchier sold the reversion of the manor to Sir Robert Lytton, Knebworth House was originally a red-brick Late Gothic manor house, built round a central court as an open square. In 1813-16 the house was reduced to its west wing, which was remodelled in a Tudor Gothic style by John Biagio Rebecca for Mrs Bulwer-Lytton, and then was transformed in 1843-45 by Henry Edward Kendall Jr. into the present Tudor Gothic structure.

Knebworth's most famous resident was Edward Bulwer-Lytton (1803-1873), the Victorian author, dramatist and statesman, who embellished the gardens in a formal Italianate fashion. The 1st Baron's great-grandson Neville (1879-1951) married Judith Blunt, a well known horse breeder who inherited Crabbet Arabian Stud in 1917 and devoted her life to it. In 1913-1914 the house was leased for £3,000 per year by Grand Duke Michael Alexandrovich of Russia and his morganatic wife Natalia Brasova.

Much of the interior of Knebworth House was redesigned by Sir Edwin Lutyens, who married Lady Emily Bulwer-Lytton (1874-1964) - he simplified the main parterre. Lady Emily was the daughter of The 1st Earl of Lytton, who served as Viceroy of India between 1876 and 1880. A herb garden, with an interlaced quincunx design, was drawn by Gertrude Jekyll in 1907, although not planted until 1982. 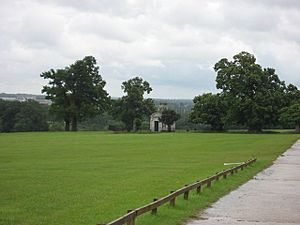 As of 2019, its residents are Henry Lytton-Cobbold and his family. He had a career in the film industry, living for some years in Los Angeles, and so the house and gardens are frequently used for filming.

In 2020 the house was also used for the British Girlband Little Mix who performed a virtual concert for Meerkat Music Presents: Little Mix Uncancelled (2020 Virtual Concert)

Numerous films and television series have been shot at Knebworth, including:

All content from Kiddle encyclopedia articles (including the article images and facts) can be freely used under Attribution-ShareAlike license, unless stated otherwise. Cite this article:
Knebworth House Facts for Kids. Kiddle Encyclopedia.