Jessica Ellen Cornish (born 27 March 1988), better known by her stage name Jessie J, is an English singer and songwriter. She was born and raised in London where she studied at the BRIT School before signing with Gut Records.

Other singles from the album included "Nobody's Perfect", "Who's Laughing Now" and "Who You Are" which charted within the top 20 in the UK but the release of fifth single "Domino" became international chart success, peaking at number 6 on the Billboard Hot 100 and becoming her second UK number one. She is the first British female artist to have six top ten singles on one album.

Jessie J has written songs for other singers such as Chris Brown and Miley Cyrus. 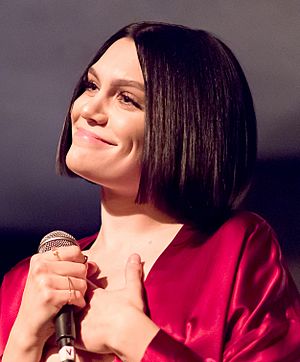 Jessie J is recognized for an unconventional musical and performing style. It mixes her soul voice with contemporary R&B, pop music and hip-hop influences. She has several awards and nominations. These include the 2011 Critics' Choice BRIT Award and the BBC's Sound of 2011. As of January 2015, Jessie J had sold over 20 million singles and 3 million albums worldwide.

Jessie J has supported various charitable causes, and has appeared on the UK charity telethons BBC Children in Need and Comic Relief. She has served as coach and mentor on the television shows The Voice UK and The Voice Australia.

All content from Kiddle encyclopedia articles (including the article images and facts) can be freely used under Attribution-ShareAlike license, unless stated otherwise. Cite this article:
Jessie J Facts for Kids. Kiddle Encyclopedia.