Jeju Island is the largest island off the coast of the Korean Peninsula, and the main island of Jeju Province of South Korea. The island lies in the Korea Strait, south of South Jeolla Province. The island contains the natural World Heritage Site Jeju Volcanic Island and Lava Tubes. Jejudo has a moderate climate; even in winter, the temperature rarely falls below 0 °C (32 °F). Jeju is a popular holiday destination and a sizable portion of the economy relies on tourism and economic activity from its civil/naval base. 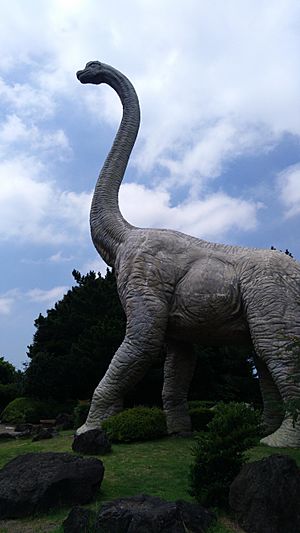 Jejudo is a volcanic island, dominated by Hallasan: a volcano 1,950 metres (6,400 ft) high and the highest mountain in South Korea. The island measures approximately 73 kilometres (45 mi) across, east to west, and 41 kilometres (25 mi) from north to south. The island formed by volcanic eruptions approximately 2 million years ago, during the Cenozoic era. The island consists chiefly of basalt and lava.

Before the Japanese annexation in 1910, the island was usually known as Quelpart to Europeans. The name apparently came from the first European ship to spot the island, the Dutch Quelpaert, which sighted it after being blown off course on its way to the Dutch trading base in Nagasaki, Japan, from Taiwan (then the Dutch colony of Formosa). "According to Korean records, a fleet of seventy pirate craft attacked Quelpart Island and adjacent parts of the Korean peninsula in 1555."

Jeju has a humid subtropical climate, making it warmer than that of the rest of South Korea. In January 2016, a cold wave affected the region. Snow and frigid weather forced the cancellation of 1,200 flights on Jejudo, stranding approximately 90,300 passengers. 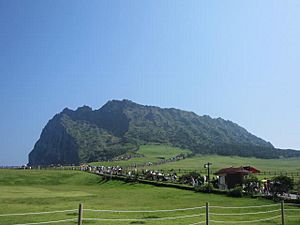 In 1993 the Republic of Korea (ROK) began planning a naval base on Jejudo (Jeju) Island, and started construction in Gangjeong village in 2007, with planned completion by 2011. The base was designed to be a mixed military-commercial port similar to those in Sydney and Hawaii, that could accommodate 20 warships and 3 submarines, as well as 2 civilian cruise ships displacing up to 150,000 tons. Its official name is the Jeju Civilian-Military Complex Port. The base was completed in 2016.

All content from Kiddle encyclopedia articles (including the article images and facts) can be freely used under Attribution-ShareAlike license, unless stated otherwise. Cite this article:
Jeju-do Facts for Kids. Kiddle Encyclopedia.