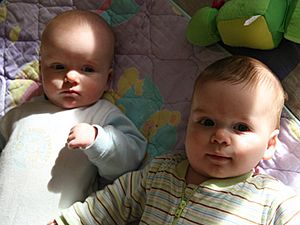 Twin studies find that extraversion/introversion has a genetic component

Those who follow this way of looking at the world say that everyone has some parts of both traits in them, though one will usually dominate over the other. At one time, extroverts were thought to make up almost three-fourths of American society. Now, researchers typically assume that the number of extroverts is pretty much equal to the number of introverts in the country.

All content from Kiddle encyclopedia articles (including the article images and facts) can be freely used under Attribution-ShareAlike license, unless stated otherwise. Cite this article:
Introversion and extroversion Facts for Kids. Kiddle Encyclopedia.