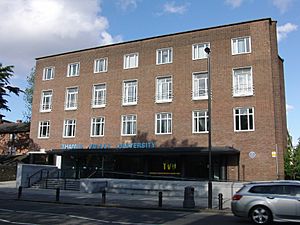 The site today on St Mary's Road makes up the Ealing campus for the University of West London.

Ealing Art College was a school of higher education. It was on St Mary's Road, in Ealing, London, England. The art school began in 1957.

In the early 1960s, the School of Art taught fashion design, graphic design, photography, music and art. The college was attended by Freddie Mercury, Ronnie Wood and Pete Townshend, who later became famous rock music performers. There was also a School of Liberal Arts. It taught language courses in French, Spanish, German and Russian.

On the campus site now is the University of West London.

All content from Kiddle encyclopedia articles (including the article images and facts) can be freely used under Attribution-ShareAlike license, unless stated otherwise. Cite this article:
Ealing Art College Facts for Kids. Kiddle Encyclopedia.