Putney Pier is beside Putney Embankment just to the west of Putney Bridge on the River Thames in London, United Kingdom.

A commuter service runs from the pier run by Thames Clippers. Passengers who have a Transport for London Travelcard or Oystercard receive a discounted ticket.

The pier is owned and operated by Livett's Launches and it is at one end of the Championship Course – the start of the Oxford and Cambridge Men's and Women's University Boat Races and the end of various non-university races from October to March. 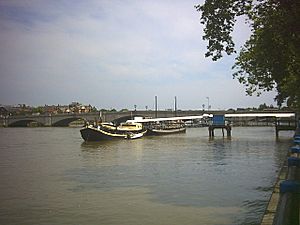 Other public transport nearby

All content from Kiddle encyclopedia articles (including the article images and facts) can be freely used under Attribution-ShareAlike license, unless stated otherwise. Cite this article:
Putney Pier Facts for Kids. Kiddle Encyclopedia.