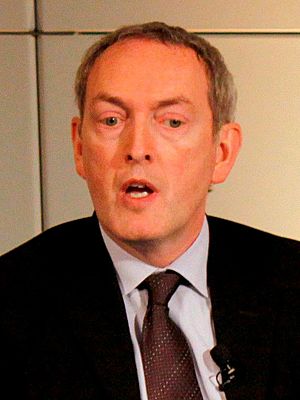 John Matthew Patrick Hutton, Baron Hutton of Furness (born 6 May 1955) is an English politician. He is a member of the Labour Party.

He was the Member of Parliament for the Barrow and Furness constituency in the United Kingdom. He was first elected in the 1992 general election, and retired in 2010. In March 2011 he published a report on public sector pension reform.

The report states that radical reform to the pension plans of six million public sector workers still leave them with "hugely generous" settlements. The retirement crisis has been caused by the scrapping of gold-plated final salary pension schemes for private sector workers coinciding with low interest rates and a lacklustre stock market. House prices have also fallen. "Future pensioners are likely to be confronted by a crisis of expectations and a squeeze in income", the report warns.

All content from Kiddle encyclopedia articles (including the article images and facts) can be freely used under Attribution-ShareAlike license, unless stated otherwise. Cite this article:
John Hutton, Baron Hutton of Furness Facts for Kids. Kiddle Encyclopedia.