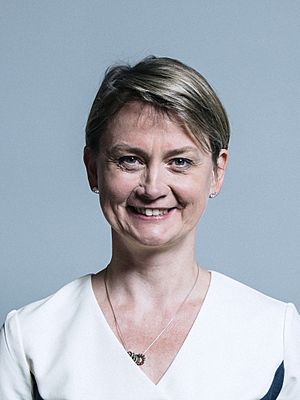 Cooper is the Member of Parliament (MP) for the Normanton, Pontefract and Castleford constituency in the United Kingdom. She is a member of the Labour Party. Her husband, Ed Balls, represents the neighbouring constituency of Morley and Outwood.

She served in the Cabinet between 2008 and 2010 under Prime Minister Gordon Brown. She was Chief Secretary to the Treasury and then Secretary of State for Work and Pensions. After Labour lost the 2010 general election, Cooper was appointed Shadow Foreign Secretary, then in 2011 Shadow Home Secretary.

All content from Kiddle encyclopedia articles (including the article images and facts) can be freely used under Attribution-ShareAlike license, unless stated otherwise. Cite this article:
Yvette Cooper Facts for Kids. Kiddle Encyclopedia.