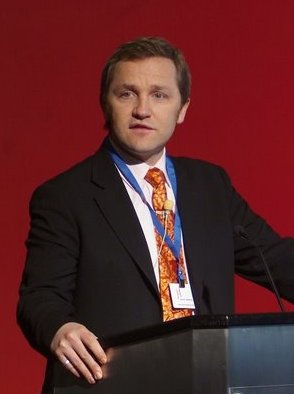 James Mark Dakin Purnell (born March 2, 1970) was an English politician was Secretary of State for Work and Pensions in 2010. He was the Member of Parliament for the Stalybridge and Hyde constituency in the United Kingdom from the elected in the 2001 general election until he retired at the 2010 general election. He is currently the Head of the Open Left project at the left leaning think tank Demos

All content from Kiddle encyclopedia articles (including the article images and facts) can be freely used under Attribution-ShareAlike license, unless stated otherwise. Cite this article:
James Purnell Facts for Kids. Kiddle Encyclopedia.