Westcliff-on-Sea is a town in the borough of Southend-on-Sea, a seaside resort and unitary authority in Essex in the East of England. It is on the north shore of the lower Thames Estuary, about 34 miles (55 km) east of London. 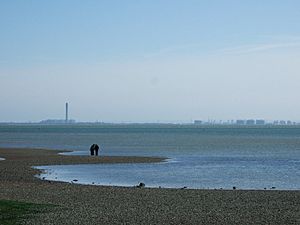 View south-east over the Thames Estuary to the Isle of Grain, Kent from the shore at Westcliff-On-Sea

The cliffs formed by erosion of the local quaternary geology give views over the Thames Estuary towards the Kent coastline to the south. The coastline has been transformed into sandy beaches through the use of groynes and imported sand. The estuary at this point has extensive mud flats. At low tide, the water typically retreats some 600 m from the beach, leaving the mud flats exposed.

The southern area of what is now known as Westcliff, south of the London Road, was known as Milton or Milton Hamlet until the period 1860-1880 when the Milton Estate and surrounding land was sold to speculators who preferred the name Westcliff-on-Sea. The transition of name was such that when the station opened in 1895 it was named Westcliff not Milton. The area between Milton Road and Hamlet Court Road was named The Hamlet by the original developers Brassey, Peto, Betts & Co. when they developed it as a "high class suburban retreat". Milton Hall (demolished 1900) was on the site of the what is now Nazareth House on the London Road. Hamlet Court was a large house in the area between Hamlet Court Road, Canewdon Road, and Ditton Court Road and was demolished in 1929.

The London, Tilbury and Southend Railway route passing through the suburb was completed to Southend in 1856 but the Westcliff railway station in Station Road was not opened until 1895. It is now managed by c2c.

Several areas of Westcliff have been classified as conservation areas: Clifftown bordering Southend town centre and including Prittlewell Square gardens, Shorefield and the Leas towards the sea front, and Milton focused on the Park Estate between Park Street and Milton Road. The Milton Conservation Area includes the Grade II listed building which was formerly the Wesleyan Chapel (Park Road Methodist Church) it was completed in 1872 to the design of Elijah Hoole (1838-1912) and was Southend's first permanent Methodist Church. It was described by the local historian Philip Morant in 1888 as "one of the greatest ornaments of Southend".

Westcliff contains a number of other Grade II listed buildings, Our Lady Help of Christians and St Helen's Church in Milton Road, the Church of Saint Alban the Martyr in St John's Road, the former Havens department store in Hamlet Court Road, Marteg House in Annerley Road, Westcliff Library in London Road and the Palace Theatre.

The main shopping area in Westcliff-on-Sea is Hamlet Court Road, where the department store Havens, established in 1901, remained the anchor store until its closure in 2017. Hamlet Court Road took its name from a manor house called the Hamlet Court, which stood on land now occupied by Pavarotti's restaurant and adjoining shops, facing towards the sea with sweeping gardens down to the rail line. The road later developed into a strong independent retail area and quickly became famous outside the area as the Bond Street of Essex. There were many haberdashers and specialist shops, and it was not too unusual to see chauffeurs waiting for their employers to emerge from the shops. 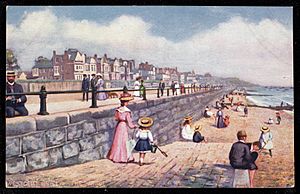 The two main theatres in Westcliff are the Cliffs Pavilion, which overlooks the seafront, and the Palace Theatre.

Westcliff-on-Sea is also home to the Thames Estuary Yacht Club and the Westcliff Casino.

All content from Kiddle encyclopedia articles (including the article images and facts) can be freely used under Attribution-ShareAlike license, unless stated otherwise. Cite this article:
Westcliff-on-Sea Facts for Kids. Kiddle Encyclopedia.