The Jewish Museum London is a museum of British Jewish life, history and identity. The museum is situated in Camden Town in the London Borough of Camden, North London. It is a place for people of all faiths to explore Jewish history, culture, and heritage. The museum has a dedicated education team, with an extensive programme for schools, community groups and families. Charles, Prince of Wales is a patron of the museum.

The events, programmes and activities at the museum aim to provoke questions, challenge prejudice, and encourage understanding.

The museum, a registered charity, was founded in 1932 in the Jewish communal headquarters in Bloomsbury. In 1995, it moved to its current location in Camden Town. Until 2007 it had a sister museum in Finchley, operated by the same charitable trust and sited within the Sternberg Centre. The Camden branch reopened in 2010 after two years of major building and extension work. The £10 million renovation was funded by the Heritage Lottery Fund and private donations.

The museum is in a row of buildings in Albert Street that have been listed Grade II by Historic England. 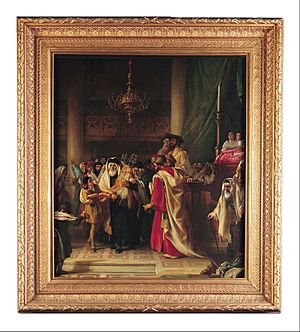 Solomon Hart, Procession of the law, 1845

The museum houses a major international-level collection of Jewish ceremonial art including the Lindo lamp, an early example of a British Hanukkah menorah. The building includes a gallery entitled Judaism: A Living Faith, displaying the museum's noted collection of Jewish ceremonial art. This collection has been awarded "designated" status by the Museums, Libraries and Archives Council in recognition of its outstanding national importance. The museum's Holocaust Gallery includes items and filmed survivor testimony from Leon Greenman, who was one of the few British subjects to be interned in the death camps section at Auschwitz.

The museum also has exhibitions recounting the history of Jewish life in England, supported by a diverse collection of objects. There are also collections of paintings, prints and drawings, and an archive of photographs, which consists mainly of black and white photographs from the 1900s to the 1940s, along with militaria from the former Jewish Military Museum, which merged into it in January 2015.

All content from Kiddle encyclopedia articles (including the article images and facts) can be freely used under Attribution-ShareAlike license, unless stated otherwise. Cite this article:
Jewish Museum London Facts for Kids. Kiddle Encyclopedia.