The Camel Trail is a permissive cycleway in Cornwall, England, United Kingdom, that provides a recreational route for walkers, runners, cyclists and horse riders. The trail is flat (and suitable for disabled access); running from Padstow to Wenford Bridge via Wadebridge and Bodmin, it is 17.3 miles (27.8 km) long and used by an estimated 400,000 users each year generating an income of approximately £3 million a year.

The trail is managed and maintained by Cornwall Council.

Later the railway was used to ship slate and china clay from inland quarries to ships in Padstow and also transport fish landed in Padstow inland to London and other cities. When both quarrying and fishing died off, the railway lost most of its traffic. The last passenger train was in 1967, freight finally ceased in 1983, when a need to invest in new track forced closure of the line. 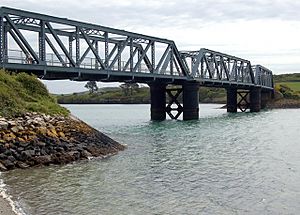 The railway was built so that the trains would not have any steep inclines or sharp turns. It is these characteristics which make it suitable as a cycle trail. The first bike hire in Cornwall was set up here in 1983. The trail is now owned by Cornwall Council who bought it for £1 and the bike hire shops operating along it pay an annual fee to help with its maintenance. Only a small part of the trail, through Wadebridge, is on roads and shared with normal traffic.

Car parking at Padstow, Wadebridge and Poley's Bridge allow the trail to be broken into 5-mile (8 km) sections for shorter rides.

There were efforts in the 1990s to convert the northern part of the cycleway back into a railway, part of the Bodmin and Wenford Railway a heritage line, to carry china clay traffic again. This was rejected on the grounds that the cycleway provides more benefits to the local community than removing heavy lorries from the local narrow winding roads, many of which have had to be converted to one-way operation in order to allow them to carry the lorry traffic. The railway still has a long term aim to extend its operations from Boscarne Junction to Guineaport at Wadebridge alongside the cycleway.

In 2006 two extensions to the trail were completed. The first was from Scarlett’s Well car park in Bodmin up into the town. The second was from Poley's Bridge near St Breward to Wenfordbridge through the old clay dries, which was made possible by Imerys donating the land.

All content from Kiddle encyclopedia articles (including the article images and facts) can be freely used under Attribution-ShareAlike license, unless stated otherwise. Cite this article:
Camel Trail Facts for Kids. Kiddle Encyclopedia.