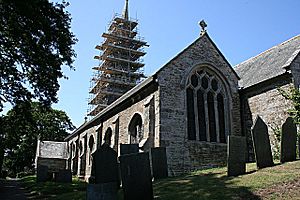 The combined parish is bounded on the south and west by the estuary of the River Camel, on the north by the Atlantic coast, and on the east by the parishes of St Endellion and St Kew. The population of the parish in the 2001 census was 2,474 (St Minver Highlands 1025; St Minver Lowlands 1449).

The main villages in the whole parish are the churchtown of St Minver, Rock, Trebetherick and Polzeath. St Minver village is 3 miles (5 kilometres) north of Wadebridge a few hundred yards west of the B3314 Wadebridge to Delabole road.

The parish church of St Menefreda is in the village of St Minver.

There are two other churches in the parish, both in St Minver Lowlands. St Enodoc's church is situated between Rock and Trebetherick at . It was built on dunes in the 15th century and gradually became buried by the shifting sands. It was restored in the 1860s and now stands in the middle of a golf course. John Betjeman, the former poet laureate is buried in the churchyard. St Michael's church stands on the south shore of Porthilly Cove, an inlet of the River Camel just south of Rock, at . This church was also restored in the 1860s.

All content from Kiddle encyclopedia articles (including the article images and facts) can be freely used under Attribution-ShareAlike license, unless stated otherwise. Cite this article:
St Minver Facts for Kids. Kiddle Encyclopedia.