St Kew (Cornish: Lanndohow) is a village in Cornwall, England, United Kingdom. It is also the name of the civil parish (known in Cornish as Pluw Gew), which includes the church town, St Kew, and nearby St Kew Highway (Fordh Lanndogho).

The parish is named for a Welsh saint, Cywa or Kew, possibly the sister of Docco, also known as: Docuin, Docwinn, Docquinn, who founded a monastery at or near the village of St Kew. The 15th-century church is now dedicated to St James.

St Kew is mentioned in history earlier than any other place in Cornwall since it appears in the Life of St Samson. The life includes an account of the saint visiting a monastery called Docco which was over the seas (St Samson came from Wales). Docco is said to have come with his sister Kew from Gwent in south Wales to Cornwall and founded at St Kew a religious centre known as Lan Docco. St Samson first visited Lan Docco when he came to Cornwall in the early 6th-century, was greeted by Junavius and well treated there. This implies that Kew and Docco were either dead or not in charge of the centre by that time.

There is a Cornish cross at Polrode Mill; its original site is unknown and the head has been damaged. Job's Cross is on the road from Trewethern to St. Kew.

St Kew was a large manor at the time of Domesday Book. There were 5 hides of land which included land for 22 ploughs. There were 59 villagers and 26 smallholders with 20 ploughs between them. Also 1-acre (4,000 m2) of meadow, 40 acres (16 ha) of pasture and a large woodland; the livestock were 9 cattle and 120 sheep. The annual value was £6.

At Bokelly there are a Tudor barn and a house which was apparently refronted in the late 17th-century. The farmhouse at Bokelly was built in the 16th-century and remodelled in the 18th; the outbuildings include a 16th-century barn and 19th-century granary and pigsties. In the late 16th-century it was the home of William Carnsew who wrote about his visits to other important houses in Cornwall.

Pengenna is a 17th-century manor house. The estate of Treharrack (grid reference SX018789) (also known as Treharrock and Trehannick) was submitted for public auction, by the owner Rev Gustavus Basset, on 8 October 1879; the estate consisted of approximately 230 acres (93 ha), a mansion, stables, coach-house, walled garden, greenhouse, etc. Basset had purchased the property, some years previous, for £11,000 and in 1879 was bought by Mr Magor of Lamellyn for £7,700. The manor, which was dismembered in circa 1700, belonged to the Treharrick family many years before the Reformation and passed by marriage to the Cavell family. A new house was built on the site in 1820.

Spoil-tips survive of Trevinnick mine which produced antimony, lead and zinc in the latter part of the 19th century. 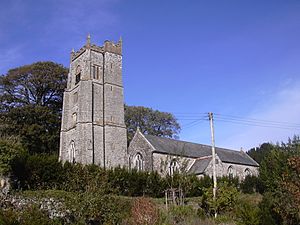 The Church of St James 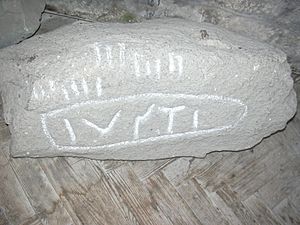 Ogham stone in the church of St James in the village of St. Kew

The 15th-century parish church, in the village of St Kew Churchtown, has important stained glass windows, including one depicting the Passion of Christ, which were restored in 2005. The windows were the most "memorable" part of Nikolaus Pevsner's visit. He also praised the pulpit: "Uncommonly good, Elizabethan, with ornamental panels ... ". He notes the carved capitals, the wagon roof, the 15th century font, bench ends, a 15th-century cross-head and the Royal Arms, in stone. There is a curious Ogham stone, found in a local farm, in the church. According to Charles Henderson, writing in the Cornish Church Guide (1925), the tracery and stonework of some windows at St Kew may have been transferred here from Bodmin Parish Church. The dedication was originally to St Docco but in the mid-15th century the patroness of a chapel (St Kewa, Virgin) nearby was transferred to the parish church when the church building was enlarged. Two other chapels existed in the parish in the late medieval period, one of St Wenna, and another of St Aldhelm at Chapel Amble (in Cornish: An Heyle 'by the estuary'). Edward Benson, the Bishop of Truro reopened the church on 24 July 1883 following a restoration.

Gallery: The church of St James 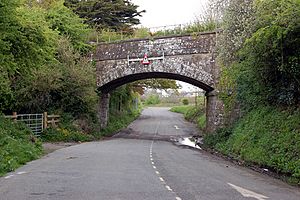 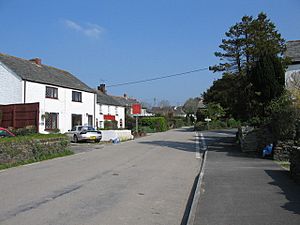 The station on the North Cornwall Railway opened on 1 June 1895, and had a passing loop and a single siding with headshunt that served a goods shed and loading dock. Both lines through the station had platforms although the down platform had no buildings and was only accessible via a foot crossing at the down end of the station. The station building itself, like the goods shed, was substantially constructed out of local stone, as was the locking room of the signal box. The passing loop was extended in 1939, but the up loop, sidings and signal box were taken out of use on 21 November 1965 as goods services had ceased on 7 September the previous year. Traffic was never very heavy and by the late 1930s was averaging five passengers per day, less than a third of that ten years earlier. The station was unmanned from 6 December 1965 and closed on 3 October 1966, although the building functioned for some time as a guest house but is now a private residence: it is partially visible from the A39.

The Cornwall Birdwatching and Preservation Society owns the Walmsley Sanctuary which covers over 20 hectares (49 acres) on the River Amble, a tributary of the River Camel, with two bird-hides for use by its members. The sanctuary is nationally important for wintering waders and wildfowl. The sanctuary was purchased in 1939 with a legacy from Dr Robert Garrett Walmsley (d. 1939). The legacy was on condition that the society undertook "to provide and administer a Sanctuary for Migrating Waders within the Duchy of Cornwall".

All content from Kiddle encyclopedia articles (including the article images and facts) can be freely used under Attribution-ShareAlike license, unless stated otherwise. Cite this article:
St Kew Facts for Kids. Kiddle Encyclopedia.