Scarborough railway station is a railway station in Scarborough, North Yorkshire, England. It opened in 1845. It is one of the eastern termini (end stations) of the North TransPennine route operated by First TransPennine Express. It is also at the northern end of the Yorkshire Coast Line. It also has the longest station seat in the world at 152 yards (139 m) in length.

From Monday to Saturdays there is normally an hourly First TransPennine Express service to York, Leeds, Manchester Piccadilly and Liverpool Lime Street. There is a two-hourly service to Bridlington and Hull on the Yorkshire Coast Line. 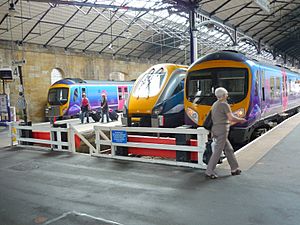 All content from Kiddle encyclopedia articles (including the article images and facts) can be freely used under Attribution-ShareAlike license, unless stated otherwise. Cite this article:
Scarborough railway station Facts for Kids. Kiddle Encyclopedia.