Ceawlin of Wessex facts for kids

Ceawlin (also spelled Ceaulin and Caelin) († 593) was the King of the Gewisse, also called the King of Wessex. He ruled from 560 to 592. He was the second king to be overlord over all the English south of the River Humber. 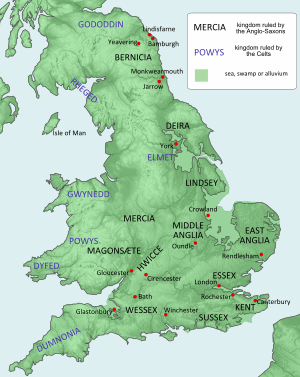 Ceawlin was the son of Cynric. He is mentioned as fighting alongside his father against the Bretons at Branbury in 556. According to the Anglo-Saxon Chronicle Ceawlin became king of the West Saxons in 560. Bede states Ceawlin was the second king to rule the southern English as overlord. The informal term for a king that ruled over other kings was bretwalda. The term comes from the Anglo-Saxon Chronicle and means 'Britain ruler'. These overkings typically received tribute from other Anglo-Saxon kings in the south.

In 577 Ceawlin, with his son Cuthwine, led the Gewisse against the Britons at 'Deorham' (Dyrham in Gloucestershire). They reportedly killed three kings, Coinmail, Condidan, and Farinmail. Ceawlin and Cuthwine captured Gloucester, Cirencester and Bath. West Saxons then colonized the lower Severn valley. The importance of this victory was that it gave the West Saxons access to the western sea. This also divided the Britons so they could no longer communicate by land. But it was territory later Wessex kings would not be able to hold. In 584 Ceawlin defeated the Britons at Fethanlea (Oxfordshire) but his ally Cutha was killed there.

About 592 Ceawlin fought a battle at Woddesbeorg (or Wodnesbeorg) also called Adam's Grave, east of Devizes in Wiltshire. There was a 'great slaughter' but nothing was said as to who he fought; Britons or Anglo-Saxons. But it was over this loss that Ceawlin was driven out of power. His nephew Ceol replaced him as king in 592. Ceawlin died in 593. At the end of his reign, the Gewisse or West Saxons held the lands of Berkshire, Wiltshire, Hampshire and much of Gloucestershire.

All content from Kiddle encyclopedia articles (including the article images and facts) can be freely used under Attribution-ShareAlike license, unless stated otherwise. Cite this article:
Ceawlin of Wessex Facts for Kids. Kiddle Encyclopedia.