Benson is a village and civil parish in South Oxfordshire, England. The 2011 Census recorded the parish's population as 4,754. The village is about 1 1⁄2 miles (2.4 km) north of Wallingford at the foot of the Chiltern Hills at the confluence of a chalk stream (Ewelme Brook) and the River Thames, next to Benson Lock.

Being on the northern (eastern) bank of the Thames, Benson has always been in Oxfordshire, unlike nearby Wallingford and Abingdon, Oxfordshire, which were part of Berkshire until the 1974 boundary changes.

The village is on river silts and gravel, just above the surrounding marshy land that gives nearby settlements of Preston Crowmarsh, Crowmarsh Gifford, and Rokemarsh their names. The fertile land which surrounds the village meant that farming was the main source of employment until the 20th century.

The toponym was originally Villam Regiam, "The King's Town". Later it was Bensington, from the Old English Bænesingtun meaning "farmstead of the people of [a man called] Benesa". The village is reputedly the site of the Battle of Bensington. The present name, Benson, can be found early in the 19th century but Bensington continued in use, at least for formal documents, until well into the second half of the century. The 1866 Working Agreement, made by the GWR for operating the Wallingford and Watlington Railway, used the older form.

There is evidence of human presence dating back to the Palaeolithic period – around 10,000 BC. The village occupies the site of an ancient British town and there is known to have been occupation during the Roman period, although Benson's written history dates back only as far as AD 571.

Recent excavations at the site of a new housing site at the junction of St Helen's Avenue and Church Road revealed evidence of early Neolithic (3500 BC) and later Bronze Age or early Iron Age (11th–8th centuries BC) pits and post holes, as well as a possible later Bronze Age roundhouse, three early or middle Saxon (5th–6th centuries AD) sunken-floored buildings and a small Saxon enclosure.

The village was taken by the West Saxons in AD 573, who established a royal vill. In 775 the West Saxons surrendered it to Offa of Mercia, who wanted a stronghold on the eastern bank of the Thames.

At the time of the Domesday Book of 1086 Benson was "the richest royal manor in Oxfordshire". The boundaries of the manor extended from the borders of Stadhampton in the north to include Henley in the south-east and were probably established long before the Conquest. The manor is stated to be worth £85 a year although comprising only 11.75 hides, whereas the Bishop of Lincoln's 90 hides at Dorchester were valued at only £30. Benson itself was clearly the most valuable part of the manor. The map shows that Benson parish is only about one tenth of the area of Benson manor, but the Domesday Book values the parish alone at £30, compared with £5 for the neighbouring parish of Berrick. 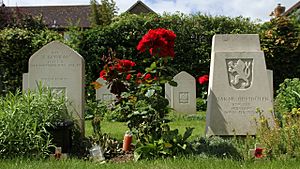 The Church of England parish church of Saint Helen is partly ancient. John Marius Wilson described it as "variously late pointed Norman and decorated; has a modern tower; contains a Norman font and two [monumental] brasses; and is very good." The parish includes the hamlets of Fifield and Crowmarsh-Battle or Preston-Crowmarsh. The village is often confused with RAF Benson, which is a well-known RAF station and airfield. The RAF airfield boundary is immediately adjacent to the village, and the aerodrome's construction closed the former "London Road". The RAF buildings are on the opposite side of the airfield to Benson village, adjacent to the village of Ewelme.

The church tower was rebuilt in 1794. It has a single clock face on the east-facing side with hours displayed in Roman numerals. The clock face erroneously has the nine o'clock marker painted as "XI". The eleven o'clock marker is also XI. This mistake gained fame during the Second World War when Germany's English-speaking propaganda broadcaster, William Joyce (Lord Haw Haw) promised an air raid on "an airfield near the village whose clock had two elevens". RAF Benson was bombed soon afterwards.

The bell tower has a ring of eight bells. Six including the tenor and treble were cast by Thomas Janaway of Chelsea in 1781. The current second and third bells were added by the Whitechapel Bell Foundry: the second cast by Charles and George Mears in 1852 and the third cast by Mears and Stainbank in 1922. In October 2009 White's of Appleton removed the original oak bell frame of 1794 and replaced it with a modern steel frame. White's refurbished the bells and fitted them with new headstocks for installation in the new steel frame. 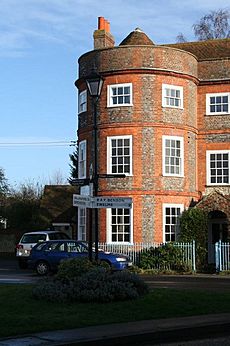 Benson is one of several key sites of the English civil war in South Oxfordshire, lying between the site of the Battle of Chalgrove Field (which took place on 18 June 1643) and Wallingford Castle, reputedly the last Royalist stronghold to surrender, and close to the Royalist cities of Oxford and Newbury. At Benson itself, a building is still known as the Court House from the time that King Charles I held court there when en route to Oxford.

A flash lock was installed on the Thames at Benson in 1746. Benson weir collapsed in 1783, necessitating the construction of Benson pound lock in 1788. The lock was rebuilt in 1870.

The road between Henley-on-Thames and Dorchester on Thames was made into a turnpike in 1736 and in the 18th and early 19th centuries Benson became an important staging post for coaches running between London and Oxford via Henley. Its broad open square was surrounded by coaching inns. At its peak the village had four large inns, ten smaller alehouses and a blacksmith. The opening, in 1844, of the Oxford branch of the GWR resulted in a rapid decline in coach traffic, so that within ten years only three Oxford-London coaches per week were running through Benson. The turnpikes on the Henley – Dorchester road were removed in 1873. 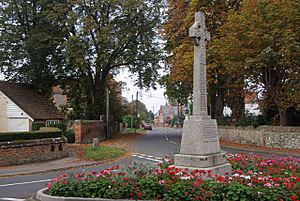 Among those who moved away was the family of Reginald Robinson Lee, aged about 16 when they moved to Hampshire. Reginald was born in Bensington in 1870, the son of William Lee (schoolmaster) and his wife Jane, and was baptised at the church of St Helen, Bensington on 19 June 1870. Reginald signed on to the RMS Titanic in Southampton on 6 April 1912, aged 42. He was in the crows' nest with Fred Fleet when the iceberg was sighted at about 11:40 p.m. on 14 April 1912, and survived the tragedy, being rescued in lifeboat 13.

Lee subsequently testified before the Board of Trade inquiry. He died on 6 August 1913 whilst serving aboard the Kenilworth Castle.

The failure to extend the Wallingford and Watlington Railway to Watlington, which would have included a station at Benson (on an embankment north of Littleworth Road and close to the junction with Oxford Road), left the village increasingly isolated, as passenger transport between London and Oxford largely followed a railway line that ran nowhere near the once-prominent coaching stop. 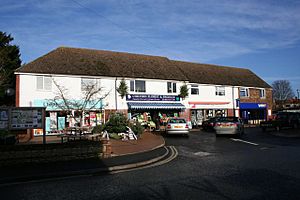 Row of shops in the High Street

Despite its lack of a railway station and distance from the M4 and M40, Benson today is a commuter village.

It has a Church of England primary school on Oxford Road. A separate infants school was built at the top of Westfield Road in 1972 "to relieve congestion at the Oxford Road school", but early in the new millennium, the infants department returned to Oxford Road, allowing the Westfield Road site to be sold off for a housing development known as Millar Close. There is also a pre-school. There is also a GP's practice, and two public houses: the 18th-century coaching inn, The Crown Inn, and the Three Horseshoes. (The number is down from five since 1990, the closed ones having become private homes.) There are about a dozen small shops, including a supermarket and a dispensing chemist. A large garage on the main Oxford road just outside the village has an on-site McDonald's (with drive-through) and a Marks and Spencer food outlet, but the Vauxhall main car dealership there has now closed.

The brook still runs through the village, and is home to trout and to the invasive American signal crayfish.

Aircraft noise in the area can be significant, which lowers property values compared with many of the surrounding villages.

The village is also a well-known frost-pocket, sometimes recording the lowest night-time temperatures in the UK. This minor climatic quirk may have led to the village's part in the development of modern meteorology, with an important meteorological observatory being located in the village in the early 19th century.

In 1993 the River Thames in Benson was used as one of the primary filming locations for Episode 7 of Series 3 of the BBC sitcom Keeping up Appearances.

All content from Kiddle encyclopedia articles (including the article images and facts) can be freely used under Attribution-ShareAlike license, unless stated otherwise. Cite this article:
Benson, Oxfordshire Facts for Kids. Kiddle Encyclopedia.