Cerdic of Wessex facts for kids

Cerdic ( 534) was the first Anglo Saxon King of the Gewisse, also called the King of Wessex. He was the of the kings of Wessex and the Anglo-Saxon kings of England beginning with Athelstan. 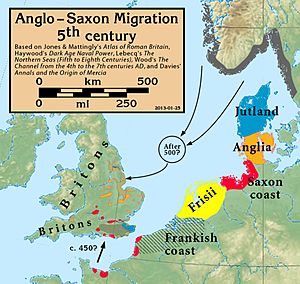 According to the Anglo-Saxon Chronicle, Cerdic, along with his son Cynric, came to Britain in 495. Their three ships landed at Cerdices ora fought the Britons there on the same day. Most of what is known about Cerdic comes from the Anglo-Saxon Chronicle. In 519 he and his son defeated Britons at Cerdices ford and took Wessex. In 527 at a place called Cerdices leaga Cerdic and Cynric battled with the Britons again. In 530 they conquered the Isle of Wight. The record for 534 states that Cerdic died this year. Cerdic was succeeded by his son Cynric.

The Anglo-Saxon Chronicle gave Cenred a pedigree going back to the Saxon god Woden. But historian Kenneth Sisam showed this was borrowed from the Kings of Bernicia and was not historic. But archaeological evidence shows that outside of Kent and Sussex, the main area of settlement was in the upper Thames Valley. This agrees with much of the Anglo-Saxon Chronicle although dates are harder to verify.

All content from Kiddle encyclopedia articles (including the article images and facts) can be freely used under Attribution-ShareAlike license, unless stated otherwise. Cite this article:
Cerdic of Wessex Facts for Kids. Kiddle Encyclopedia.