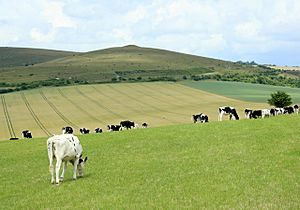 Cattle on the side of Woodborough Hill. Adam's Grave hill and Walkers Hill on the skyline

Adam's Grave was a Neolithic long barrow near Alton Barnes in Wiltshire, southwest England. It has been scheduled as an ancient monument.

The barrow is considered to be of the Severn-Cotswold tomb type. These generally consist of long, precisely built trapezoidal earth mounds covering burial chambers. Because of this they are a type of chambered long barrow. The chamber, made of sarsen stones, contained partial human skeletons. An arrowhead was also recovered. There is a hill in the spot with the remains of the barrow being 70 metres (230 ft) long and around 7 metres (23 ft) high with ditches on either side. It was partially excavated by John Thurnam in 1860. The area around Adam's Grave has a high density of long barrows and is important because of its archaeological potential.

The arrangement of stones around the site suggests there was once a kerb or forecourt. They are known as ‘Old Adam and ‘Little Eve’ and are near the original entrance to the barrow. According to folklore the barrow is the grave of a giant and his ghost has been reported. Associations with Avebury have also been suggested.

All content from Kiddle encyclopedia articles (including the article images and facts) can be freely used under Attribution-ShareAlike license, unless stated otherwise. Cite this article:
Adam's Grave Facts for Kids. Kiddle Encyclopedia.