Sweyn Forkbeard ( Old Norse: Sveinn Haraldsson tjúguskegg; Danish: Svend Tveskæg; c. 960 – 3 February 1014) was king of Denmark from 986 to 1014. He was the father of King Harald II of Denmark, King Cnut the Great and Queen Estrid Svendsdatter.

In the mid-980s, Sweyn revolted against his father, Harald Bluetooth, and seized the throne. Harald was driven into exile and died shortly afterwards in November 986 or 987. In 1000, with the allegiance of Trondejarl and Eric of Lade, Sweyn ruled most of Norway. In 1013, shortly before his death, he became the first Danish king of England after a long effort.

A coin of Sweyn Forkbeard, minted in 995; this is the earliest known coin with a Latin inscription minted in Scandinavia, based on Anglo-Saxon models and made by an English moneyer (obv.: ZVEN REX AD DENER "Sven, king of [or among] the Danes", rev.: GOD-WINE M-AN D-NER "Godwine, moneyer among the Danes").

Historiographical sources on Sweyn's life include the Anglo-Saxon Chronicle (where his name is rendered as Swegen), Adam of Bremen's 12th-century Deeds of the Bishops of Hamburg, and Snorri Sturluson's 13th-century Heimskringla. Conflicting accounts of Sweyn's later life also appear in the Encomium Emmae Reginae, an 11th-century Latin encomium in honour of his son king Cnut's queen Emma of Normandy, along with Chronicon ex chronicis by Florence of Worcester, another 11th-century author.

Sweyn's father, Harald Bluetooth, was one of the first of the reigning Scandinavian kings to be baptised, in the early or mid-960s. According to Adam of Bremen, Harald's son Sweyn was baptised "Otto" (in honour of German king Otto I). There are conflicting records as to the identity of his mother. Adam of Bremen identifies her as "Gunhild", but some modern day scholars give her name as Tove from Western Wendland. Sweyn married the widow of Erik, king of Sweden, named "Gunhild" in some sources, or identified as an unnamed sister of Boleslaus, ruler of Poland. 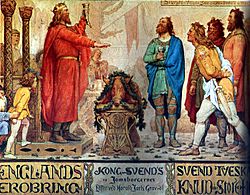 Sweyn and the Jomsvikings at the funeral ale of his father Harald Bluetooth. Painting by Lorenz Frølich, c. 1883–86, Frederiksborg Castle.

In the mid-980s, Sweyn revolted against his father and seized the throne. Harald was driven into exile and died shortly afterwards in November 986 or 987.

Adam of Bremen depicted Sweyn as a rebellious pagan who persecuted Christians, betrayed his father and expelled German bishops from Scania and Zealand. According to Adam, Sweyn was sent into exile by his father's German friends and deposed in favour of king Eric the Victorious of Sweden, whom Adam wrote ruled Denmark until his death in 994 or 995. Sørensen (2001) argues that Adam's depiction of Sweyn may be overly negative, as seen through an "unsympathetic and intolerant eye". Adam's account is thus not seen as entirely reliable; the claimed 14-years' exile of Sweyn to Scotland does not seem to agree with Sweyn's building churches in Denmark throughout the same period, including the churches in Lund and Roskilde. According to Adam, Sweyn was punished by God for leading the uprising which led to king Harald's death, and had to spend fourteen years abroad (i.e. 986–1000). The historicity of this exile, or its duration, is uncertain. Adam purports that Sweyn was shunned by all those with whom he sought refuge, but was finally allowed to live for a while in Scotland. Adam also suggests that Sweyn in his youth lived among heathens, and only achieved success as a ruler after accepting Christianity. 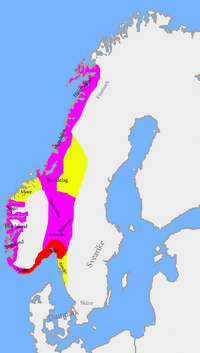 Division of Norway after the Battle of Svolder according to Heimskringla: The red area was under direct Danish control, with Sweyn's ruling it as a Danish extension. Eiríkr Hákonarson ruled the purple area as a fiefdom from Sweyn Forkbeard. The yellow area was under Sveinn Hákonarson, his half-brother, held as a fief of Olof Skötkonung, the Swedish king.

Harald Bluetooth had already established a foothold in Norway, controlling Viken in c. 970. He may, however, have lost control over his Norwegian claims following his defeat against a German army in 974.

Sweyn built an alliance with Swedish king Olof Skötkonung and Eirik Hákonarson, Jarl of Lade, against Norwegian king Olaf Tryggvason. The Kings' sagas ascribe the causes of the alliance to Olaf Tryggvason's ill-fated marriage proposal to Sigrid the Haughty and his problematic marriage to Thyri, sister of Svein Forkbeard.

The allies attacked and defeated king Olaf in the western Baltic Sea when he was sailing home from an expedition, in the Battle of Svolder, fought in September of either 999 or 1000. The victors divided Norway among them. According to the account of the Heimskringla, Sweyn re-gained direct control of Viken district.

King Olaf of Sweden received four districts in Trondheim as well as Møre, Romsdal and Rånrike (the Fagrskinna, by contrast, says that the Swedish part consisted of Oppland and a part of Trondheim). He gave these to his son in law, Jarl Svein Hákonarson, to hold as a vassal. The rest of Norway was ruled by Eirik Hákonarson as King Svein's vassal.

The Jarls Eirik and Svein proved strong, competent rulers, and their reign was prosperous. Most sources say that they adopted Christianity but allowed the people religious freedom, leading to a backlash against Christianity which undid much of Olaf Tryggvason's missionary work.

Sweyn apparently recruited priests and bishops from England, in preference to the Archbishopric of Bremen. In part, this reflected the fact that there were numerous Christian priests of Danish origin in the Danelaw, while Sweyn had few personal connections to Germany. However, Sweyn's preference for the English church may also have had a political motive, because German bishops were an integral part of the state. It has been suggested that Sweyn was seeking to pre-empt any diminution of his independence by German leaders. This may have been a reason for Adam of Bremen's apparent hostility in his accounts of Sweyn; by accentuating English ecclesiastical influence in his kingdom, Sweyn was effectively spurning the Archbishop of Bremen.

The "Chronicle of John of Wallingford" (c. 1225–1250) records Sweyn's involvement in raids against England during 1002–1005, 1006–1007, and 1009–1012 to avenge the St. Brice's Day massacre of England's Danish inhabitants in November 1002. According to Ashley (1998), Sweyn's invasion was partly motivated by the massacre of Danes in England ordered by Æthelred the Unready in 1002, in which his sister and brother-in-law are said to have been killed, but Lund (2001) argues that the main motivation for the raids was more likely the prospect of revenue.

Sweyn campaigned in Wessex and East Anglia in 1003–1004, but a famine forced him to return to Denmark in 1005. Further raids took place in 1006–1007, and in 1009–1012 Thorkell the Tall led a Viking invasion into England. Simon Keynes regards it as uncertain whether Sweyn supported these invasions, but "whatever the case, he was quick to exploit the disruption caused by the activities of Thorkell's army". Sweyn acquired massive sums of Danegeld through the raids. In 1013, he is reported to have personally led his forces in a full-scale invasion of England.

The contemporary Peterborough Chronicle (part of the Anglo-Saxon Chronicle) states:

before the month of August came king Sweyn with his fleet to Sandwich. He went very quickly about East Anglia into the Humber's mouth, and so upward along the Trent till he came to Gainsborough. Earl Uchtred and all Northumbria quickly bowed to him, as did all the people of the Kingdom of Lindsey, then the people of the Five Boroughs. He was given hostages from each shire. When he understood that all the people had submitted to him, he bade that his force should be provisioned and horsed; he went south with the main part of the invasion force, while some of the invasion force, as well as the hostages, were with his son Cnut. After he came over Watling Street, they went to Oxford, and the town-dwellers soon bowed to him, and gave hostages. From there they went to Winchester, and the people did the same, then eastward to London.

But the Londoners put up a strong resistance, because King Æthelred and Thorkell the Tall, a Viking leader who had defected to Æthelred, personally held their ground against him in London itself. Sweyn then went west to Bath, where the western thanes submitted to him and gave hostages. The Londoners then followed suit, fearing Sweyn's revenge if they resisted any longer. King Æthelred sent his sons Edward and Alfred to Normandy, and himself retreated to the Isle of Wight, and then followed them into exile. On Christmas Day 1013 Sweyn was declared King of England.

Based in Gainsborough, Lincolnshire, Sweyn began to organise his vast new kingdom, but he died there on 3 February 1014, having ruled England for only five weeks. His embalmed body was returned to Denmark for burial in the church he had built. Tradition locates this church in Roskilde, but it is more plausible that it was actually located in Lund in Scania (now part of Sweden).

Sweyn's elder son, Harald II, succeeded him as King of Denmark, while his younger son, Cnut, was proclaimed King of England by the people of the Danelaw. However, the English nobility sent for Æthelred, who upon his return from exile in Normandy in the spring of 1014 managed to drive Cnut out of England. Cnut soon returned and became king of all England in 1016, following the deaths of Æthelred and his son Edmund Ironside; he succeeded his brother as King of Denmark in 1019 and eventually also ruled Norway, parts of Sweden, Pomerania, and Schleswig.

Cnut and his sons, Harold Harefoot and Harthacnut, ruled England over a combined 26-year period (1016–1042). After Harthacnut's death, the English throne reverted to the House of Wessex under Æthelred's younger son Edward the Confessor (reigned 1042–1066).

Sweyn's daughter, Estrid Svendsdatter, was the mother of King Sweyn II of Denmark. Her descendants continue to reign in Denmark to this day. One of them, Margaret of Denmark, married James III of Scotland in 1469, introducing Sweyn's bloodline into the Scottish royal house. After James VI of Scotland inherited the English throne in 1603, Sweyn's descendants became monarchs of England again.

Sweyn had eight children with Sigrid the Haughty and Gunhild of Wenden:

King Sweyn Forkbeard is played by Ernest Graves in the 1970 film The Ceremony of Innocence. He also appears in the manga Vinland Saga.

All content from Kiddle encyclopedia articles (including the article images and facts) can be freely used under Attribution-ShareAlike license, unless stated otherwise. Cite this article:
Sweyn Forkbeard Facts for Kids. Kiddle Encyclopedia.