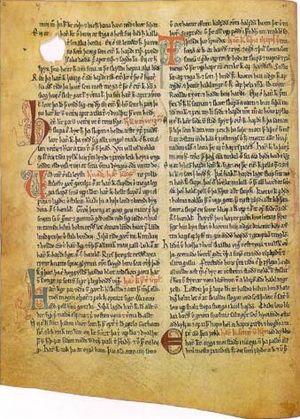 A page of the Eggertson copy of Heimskringla

Heimskringla is the best known of the old Norse kings' sagas. It was written in Old Norse in Iceland by the poet and historian Snorri Sturluson (1179 – 1242) ca. 1230. The name Heimskringla was first used in the 17th century, it comes from the first two words of one of the manuscripts (kringla heimsins - the circle of the world).

Heimskringla is a collection of tales about the Norwegian kings, beginning with the legendary Swedish dynasty of the Ynglingas, followed by accounts of historical Norwegian rulers from Harald Fairhair of the 9th century up to 1177.

All content from Kiddle encyclopedia articles (including the article images and facts) can be freely used under Attribution-ShareAlike license, unless stated otherwise. Cite this article:
Heimskringla Facts for Kids. Kiddle Encyclopedia.