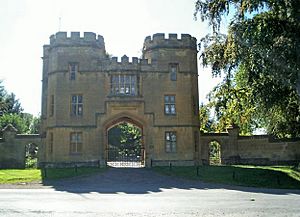 Sudeley Castle is a castle near Winchcombe, Gloucestershire, England, United Kingdom. It was built in 1441 by Ralph Boteler, who had the castle confiscated by Edward IV of England. Edward gave Sudeley Castle to his brother, who later became Richard III of England, who then gave it to his uncle Jasper Tudor, Duke of Bedford.

By the time Henry VIII of England succeeded, the castle was the property of the Crown again. It had been visited by Henry in 1535, with his second wife Anne Boleyn, but had been empty and unattended for some time. When Henry died the castle became the property of his son, Edward VI of England, who gave it to his uncle, Thomas Seymour. Thomas was made Lord of Sudeley and married the King's stepmother, Catherine Parr. During this time Thomas began to regenerate the castle for Catherine's use, but only one room that he had built remains today.

Seymour and Catherine moved into the castle and brought with them ladies to attend on the Queen Dowager, as well as gentlemen of the household and Yeomen of the guard. The castle was then home to over 100 people. Another famous figure who came to live in the castle of Lady Jane Grey, who was a ward of Seymour's, as well as the young Elizabeth I of England.

Catherine died after she had given birth to a daughter, Mary, at Sudeley Castle and was buried in its St. Mary's Chapel. Her grave was discovered in 1728 after the castle and the chapel had been left in ruins by the English Civil War. She was later reinterred by the Rector of Sudeley in 1817.

Seymour's ambitions led to him being arrested and beheaded, after which Sudeley Castle became the property of Catherine's brother William Parr, who was the Marquess of Nothampton. Parr was stripped of his property and title after being involved in the failed attempt to make Lady Jane Grey Queen of England.

In 1554 Mary I of England gave Sudeley Castle John Brydges, Lord Chandos and it remained as his property throughout the reign of Elizabeth I of England. Elizabeth was entertained three times at Sudeley Castle, which including a spectacular feast in 1592 to celebrate the anniversary of the defeat of the Spanish Armada.

All content from Kiddle encyclopedia articles (including the article images and facts) can be freely used under Attribution-ShareAlike license, unless stated otherwise. Cite this article:
Sudeley Castle Facts for Kids. Kiddle Encyclopedia.