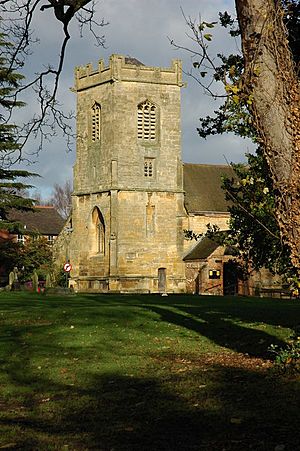 The tower of the former St Andrew's Church, now a parish hall

Pershore is a market town in Worcestershire, England, on the banks of the River Avon. Pershore is in the Wychavon district and is part of the West Worcestershire parliamentary constituency. At the 2011 census the population was 7,125. The town is best known for Pershore Abbey, Pershore College (now a campus of Warwickshire College), and the plums and pears grown locally.

Pershore is situated on the River Avon, 6 miles west of Evesham and 6 miles east of Upton-upon-Severn in the Vale of Evesham, a district rich in fruit and vegetable production The town lies near the A44 midway from Worcester to Evesham. The nearest motorway junctions are junction 7 of the M5 (South Worcester) or junction 1 of the M50. There is a railway station on the Cotswold Line, enabling direct travel to Paddington station, London, via Evesham, Moreton-in-Marsh, Oxford, Didcot and Reading, although Pershore station is more than a mile from the centre of the town towards Pinvin.

The town contains much elegant Georgian architecture. In 1964 the Council for British Archaeology included Pershore in its list of 51 British "Gem Towns" worthy of special consideration for historic preservation, and it has been listed as an outstanding conservation area. Parts of the abbey, which stand in an expanse of public grassland close to the centre of the town, date from the 11th century. The current structure is far smaller than the original building, which was plundered during the reign of Henry VIII at the Dissolution. The original nave was destroyed. The north transept collapsed later. The present nave occupies the western part of what would originally have been the choir.

The Abbey Park includes a bowls club, children's play area and skate board park (2006), consisting of a mini ramp and a street section.

The town has a community arts centre, a Volunteer Centre, and a morris dance tradition.

The Pershore Plum Festival is held annually in August to celebrate the local tradition of growing plums including the local varieties Pershore Purple, Pershore Yellow Egg Plum and Pershore Emblem. Activities include crowning the plum princess, a family fun run, plum themed art exhibition and the Plum Fayre. There is also a classic car rally and nearby Worcester Racecourse revived The Land O'Plums Chase from 72 years ago.

The festival won the Best Tourism Event and Festival in the Worcestershire Welcome Awards 2011.

Each year on the spring bank holiday, usually the last Monday in May, a carnival is held for the entertainment and enjoyment of the townsfolk and people from a wide surrounding area. Each year has a different theme, the programme covers being designed by children attending Pershore schools. The day starts with a procession of a variety of entries that passes through the town ending at Abbey Park. During the procession a bucket collection is taken in support of the year's two carnival charities. In the park there are many different stalls, a show arena, a dog show and many other attractions, each year being different. The day ends with an evening concert and firework display. Various fundraising events take place prior to the carnival, such as a quiz night, a race night and a duck race on the river. 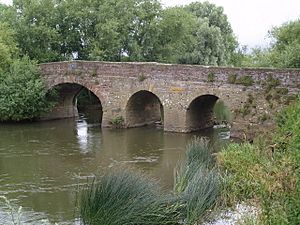 About 0.5 miles (0.80 km) outside the town is Pershore Old Bridge over the River Avon. A bridge was originally built on the site, in about 1413, by monks, supposedly after their abbot, Upton, was drowned falling from stepping-stones. The scene is included in the historical window installed in 1862–64 in Pershore Abbey.

In 1644, during the English Civil War, a later bridge was damaged and almost destroyed. In subsequent years the bridge was maintained by re-using stones from nearby Elmley Castle and from the abbey. In 1926 the bridge was taken out of service for road traffic and is now used only as a footbridge.

Pershore is twinned with Bad Neustadt in Germany and Plouay in France.

All content from Kiddle encyclopedia articles (including the article images and facts) can be freely used under Attribution-ShareAlike license, unless stated otherwise. Cite this article:
Pershore Facts for Kids. Kiddle Encyclopedia.