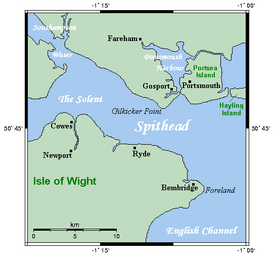 Spithead is an area of the Solent and a roadstead off Gilkicker Point in Hampshire, England. It is protected from all winds, except those from the southeast. It receives its name from the Spit, a sandbank stretching south from the Hampshire shore for 5 km (3.1 mi); and it is 22.5 km (14.0 mi) long by about 6.5 km (4.0 mi) in average breadth. Spithead has been strongly defended since 1864 by four Solent Forts, which complement the Fortifications of Portsmouth.

The Fleet Review is a British tradition that usually takes place at Spithead, where the monarch reviews the massed Royal Navy.

The Spithead mutiny, occurred in 1797, in the Royal Navy fleet at anchor at Spithead. It is also the location where HMS Royal George sank in 1782 with the loss of more than 800 lives.

All content from Kiddle encyclopedia articles (including the article images and facts) can be freely used under Attribution-ShareAlike license, unless stated otherwise. Cite this article:
Spithead Facts for Kids. Kiddle Encyclopedia.