St Boniface Down facts for kids 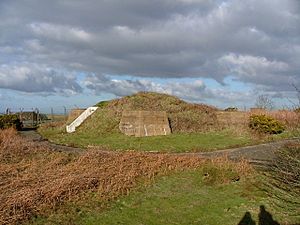 The radar station on the summit 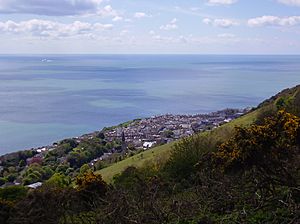 View of Ventnor, looking south-west down the steep southern face of the down

St Boniface Down is a chalk down on the Isle of Wight, England. It is located close to the town of Ventnor, in the southeast of the Island, and rises to 241 metres (791 ft), the Island's highest point with views stretching from Beachy Head to the east, Portsmouth to the north and the Isle of Portland to the west. It is 1 kilometre (0.6 mi) north of the town. There is reputed to be a wishing well on its southern slope, which requires the wisher to climb up from the south without looking back. In 1545, a French invasion force attempted this against a force of the Isle of Wight Militia commanded by Sir John Fyssher – which allegedly included several women archers- and were routed. In 1940, the radar station was bombed by Ju 87 Stuka dive bombers, which is reconstructed in the film "The Battle of Britain". The top is surmounted by a round barrow.

At the eastern foot of the down, on the A3055 road between Bonchurch and Luccombe, a path descends into Bonchurch Landslips via a scenic rock cleft, the Devil's Chimney.

St Boniface Down is home to the largest cricket species within the British Isles, the great green bush cricket.

The area includes some unusual plant communities including acid grassland and heathland, resulting in parts of the Down being designated as a Site of Special Scientific Interest. The gravel capping supports extensive tracts of gorse Ulex europaeus with intervening areas of heathland and acid grassland dominated by heather Calluna vulgaris, bell heather Erica cinerea, purple moor-grass Molinia caerulea, bristle bent Agrostis curtisii and locally bilberry Vaccinium myrtillus. The occurrence of heathland on deep gravel overlying chalk, the naturalised holm oak woodland and the juxtaposition of heath and chalkland vegetation are all unusual biological features in Britain.

All content from Kiddle encyclopedia articles (including the article images and facts) can be freely used under Attribution-ShareAlike license, unless stated otherwise. Cite this article:
St Boniface Down Facts for Kids. Kiddle Encyclopedia.