Blackgang Chine is the oldest amusement park in the United Kingdom, having opened in the 1840s. Named after a now-destroyed chine (a coastal ravine) in the soft Cretaceous cliffs, it is about 6 miles from Ventnor at the southern tip of the Isle of Wight just below St Catherine's Down. Blackgang Chine and its sister park Robin Hill are owned by the Dabell family. Blackgang Chine is home to a series of imaginatively themed lands, including a Pirate Cove, a realm of Dinosaurs, an Underwater Kingdom, a Fairy Village and a Cowboy Town. Owing to the unstable land on which the park is situated, landslides occur frequently, meaning that attractions have been moved further inland to safer ground on several occasions. 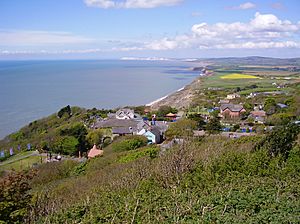 The site of Blackgang Chine.

During Blackgang Chine's early years, the area was a steep gaunt ravine, overlooking Chale Bay, stretching around three-quarters of a mile down to the shore. It was a quiet place, visited by few people other than local fishermen with rumours of a thriving smuggling trade, which has now become a key theme of the park. On 11 October 1836 the cargo ship Clarendon was wrecked at the foot of Blackgang Chine, with the loss of many aboard.

During Victorian times, people were seeking out new healthy holiday resorts, ideally near the coast. As the railway network was getting closer and closer to the south coast, the Isle of Wight was becoming an increasingly attractive holiday destination. Alexander Dabell, the founder of the park, soon realised the business potential of this, trying various ventures. In 1839 Alexander became friends with a publican who had recently built a hotel at Blackgang, which now forms the Chine Cafe (formerly Pirates' Pantry restaurant) and administration offices. After studying the gault and chine gorge, he knew instantly that gardens could be set up that would appeal to the Victorians as a romantic holiday destination. This along with the increasing popularity of the adjacent Sandrock Spring (a chalybeate spring) led to Alexander concluding a lease for the site in 1842 and the establishment of Blackgang Chine amusement park in 1843. The area was then opened up to the public with pathways built down to the ravine and gardens landscaped on the cliffs. Steps were built to give access to the beach from the lower road. Since the park was opened, it has remained a family business, with the descendants of Alexander Dabell owning it ever since. The park's claim to have been established in 1843 would make it the oldest theme park in the United Kingdom. Its initial theme of a general-purpose scenic and curiosity park led to one of its most famous attractions, a large whale skeleton, which had been washed up near the coast of The Needles in 1842, and is still a showpiece today. 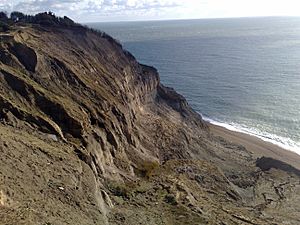 Owing to continual landslides, the chine itself has been destroyed, and coastal erosion still has a significant impact on the area today. The park's focus now is themed entertainment for families with young children, lifesize animatronic dinosaurs being a noted feature. The same owners run a sister site, the Robin Hill countryside adventure park. Clifftop walks in and around the area give panoramic views of the English Channel and the south-western Isle of Wight coast.

According to a May 2000 talk to the Isle of Wight Postcard Club by the then director, Mr Simon Dabell, the etymology is simply "black pathway" (the original appearance of the chine), but the theme park understandably fosters the interpretation of a smuggling origin. Thus visitors to the park are greeted by a gigantic fibreglass status of a smuggler between whose legs they could pass to enter.

The park is frequently associated with ghosts, particularly related to smugglers, with several tales of sightings around the park. In 2008 a video was recorded, showing what appeared to be the apparition of a girl in a blue dress. 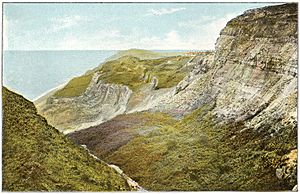 Sited below the village of Blackgang at the western end of the Undercliff, Blackgang Chine was, historically, a spectacular ravine (in 1800 a "steep gaunt ravine" descending 500 feet over about 3⁄4 mile (1.2 km)).

The location is based on unstable terrain owing to the underlying Gault Clay strata, resulting in a succession of huge landslips giving the area a very rugged appearance akin to the better known Jurassic Coast. Currently the cliffs are eroding at a rate of about 3.5 metres per year, although this process is not gradual nor consistent. Continuing landslides and coastal erosion swept away the paths in the early 1900s, and have since obliterated the chine itself and repeatedly forced the park owners to move the clifftop facilities inland.

The park combines outdoor and walkthrough attractions with heritage exhibitions and a couple of rides. Below is a list of the attractions currently in operation at the park:

All content from Kiddle encyclopedia articles (including the article images and facts) can be freely used under Attribution-ShareAlike license, unless stated otherwise. Cite this article:
Blackgang Chine Facts for Kids. Kiddle Encyclopedia.