Snakes and ladders facts for kids

Snakes and ladders, known originally as Moksha Patam, is an ancient Indian board game for two or more players regarded today as a worldwide classic. It is played on a game board with numbered, gridded squares. A number of "ladders" and "snakes" are pictured on the board, each connecting two specific board squares. The object of the game is to navigate one's game piece, according to die rolls, from the start (bottom square) to the finish (top square), helped by climbing ladders but hindered by falling down snakes.

The game is a simple race based on sheer luck, and it is popular with young children. The historic version had its roots in morality lessons, on which a player's progression up the board represented a life journey complicated by virtues (ladders) and vices (snakes). The game is also sold under other names such as Chutes and Ladders, Bible Ups and Downs, etc., some with a morality motif; a morality Chutes and Ladders was published by the Milton Bradley Company starting from 1943.

The size of the grid varies, but is most commonly 8×8, 10×10 or 12×12 squares. Boards have snakes and ladders starting and ending on different squares; both factors affect the duration of play. Each player is represented by a distinct game piece token. A single die is rolled to determine random movement of a player's token in the traditional form of play; two dice may be used for a shorter game. 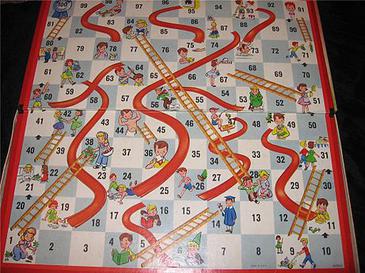 Each player starts with a token on the starting square (usually the "1" grid square in the bottom left corner, or simply, off the board next to the "1" grid square). Players take turns rolling a single die to move their token by the number of squares indicated by the die roll. Tokens follow a fixed route marked on the gameboard which usually follows a boustrophedon (ox-plow) track from the bottom to the top of the playing area, passing once through every square. If, on completion of a move, a player's token lands on the lower-numbered end of a "ladder", the player moves the token up to the ladder's higher-numbered square. If the player lands on the higher-numbered square of a "snake" (or chute), the token must be moved down to the snake's lower-numbered square.

If a 6 is rolled the player, after moving, immediately rolls again for another turn; otherwise play passes to the next player in turn. The player who is first to bring their token to the last square of the track is the winner.

Variants exists where a player must roll the exact number to reach the final square. Depending on the variation, if the die roll is too large, the token either remains in place or goes off the final square and back again. (For example, if a player requiring a 3 to win rolls a 5, the token moves forward three spaces, then back two spaces.) In certain circumstances (such as a player rolling a 5 when a 1 is required to win), a player can end up further away from the final square after their move, than before it.

In the book Winning Ways the authors propose a variant which they call Adders-and-Ladders which, unlike the original game, involves skill. Instead of tokens for each player, there is a store of indistinguishable tokens shared by all players. The illustration has five tokens (and a five by five board). There is no die to roll; instead, the player chooses any token and moves it one to four spaces. Whoever moves the last token to the Home space (i.e. the last number) wins.

The most widely known edition of snakes and ladders in the United States is Chutes and Ladders, released by Milton Bradley in 1943. The playground setting replaced the snakes, which were disliked by children at the time. It is played on a 10×10 board, and players advance their pieces according to a spinner rather than a die. The theme of the board design is playground equipment, showing children climbing ladders and descending chutes.

Black children were depicted in the Milton Bradley game for the first time in 1974. There have been many pop culture versions of the game, with graphics featuring such children's television characters as Dora the Explorer and Sesame Street. It has been marketed as "The Classic Up and Down Game for Preschoolers". In 1999, Hasbro released Chutes and Ladders for PCs.

In Canada the game has been traditionally sold as "Snakes and Ladders" and produced by the Canada Games Company. Several Canada-specific versions have been produced over the years, including a version with toboggan runs instead of snakes.

An early British version of the game depicts the path of a young boy and girl making their way through a cartoon railroad and train system.

During the early 1990s in South Africa, Chutes and Ladders games made from cardboard were distributed on the back of egg boxes as part of a promotion.

Even though the concept of major virtues against vices and related Eastern spiritualism is not much emphasized in modern incarnations of the game, the central mechanism of snakes and ladders makes it an effective tool for teaching young children about various subjects. In two separate Indonesian schools, the implementation of the game as media in English lessons of fifth graders not only improved the students' vocabulary but also stimulated their interest and excitement about the learning process. Researchers from Carnegie Mellon University found that pre-schoolers from low income backgrounds who played an hour of numerical board games like snakes and ladders matched the performance of their middle-class counterparts by showing improvements in counting and recognizing number shapes. An eco-inspired version of the game was also used to teach students and teachers about climate change and environmental sustainability.

Mathematics of the game 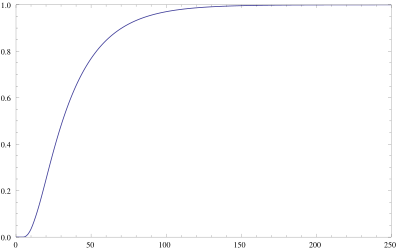 Any version of snakes and ladders can be represented exactly as an absorbing Markov chain, since from any square the odds of moving to any other square are fixed and independent of any previous game history. The Milton Bradley version of Chutes and Ladders has 100 squares, with 19 chutes and ladders. A player will need an average of 39.2 spins to move from the starting point, which is off the board, to square 100. A two-player game is expected to end in 47.76 moves with a 50.9% chance of winning for the first player. These calculations are based on a variant where throwing a six does not lead to an additional roll; and where the player must roll the exact number to reach square 100 and if they overshoot it their counter does not move.

All games have morals; and the game of Snakes and Ladders captures, as no other activity can hope to do, the eternal truth that for every ladder you hope to climb, a snake is waiting just around the corner, and for every snake a ladder will compensate. But it's more than that; no mere carrot-and-stick affair; because implicit in the game is unchanging twoness of things, the duality of up against down, good against evil; the solid rationality of ladders balances the occult sinuosities of the serpent; in the opposition of staircase and cobra we can see, metaphorically, all conceivable oppositions, Alpha against Omega, father against mother.

All content from Kiddle encyclopedia articles (including the article images and facts) can be freely used under Attribution-ShareAlike license, unless stated otherwise. Cite this article:
Snakes and ladders Facts for Kids. Kiddle Encyclopedia.