Holt is a market town, civil parish and electoral ward in the English county of Norfolk. The town is 22.8 miles (36.7 km) north of the city of Norwich, 9.5 miles (15.3 km) west of Cromer and 35 miles (56 km) east of King's Lynn. The town is on the route of the A148 King's Lynn to Cromer road. The nearest railway station is in the town of Sheringham where access to the national rail network can be made via the Bittern Line to Norwich. Holt also has a railway station on the preserved North Norfolk Railway, the 'Poppy Line', of which it is the south-western terminus. The nearest airport is Norwich. The town has a population of 3,550, rising and including the ward to 3,810 at the 2011 census. Holt is within the area covered by North Norfolk District Council.

The name Holt is thought to derive from the Anglo-Saxon word for woodland and Holt is located on wooded high ground of the Cromer-Holt ridge at the crossing point of two ancient by-ways and as such was a natural point for a settlement to grow. The town has a mention in the great survey of 1086 known as the Domesday Book. In the survey it is described as a market town and a port with the nearby port of Cley next the Sea being described as Holt's port. It also had five watermills and twelve plough teams and as such was seen as a busy thriving viable settlement then. The first Lord of the Manor was Walter Giffard; it passed to Hugh, Earl of Chester, who then left it to the De Vaux family. By this time Holt had a well-established market and two annual fairs which were held on 25 April and 25 November. Over the years Holt grew as a local place of trade and commerce. The weekly market which has taken place since before the 1080s was stopped in 1960s.

The great fire of Holt

On 1 May 1708 the town of Holt was devastated by a fire which destroyed most of the medieval town in the matter of three hours. The fire started at Shirehall Plain and quickly spread through the timber houses of the town. The church was also badly damaged with its thatched chancel destroyed and the lead melted from the windows with the flames spreading up the steeple. Local reports of the time state that the fire spread so swiftly that the butchers did not have time to rescue their meat from their stalls on the market. The damage to the town was estimated to be in the region of £11,000. which was a massive amount of money at that time. After the fire the town received many donations from all over the country and the task of reconstruction began.

With most of the medieval buildings destroyed in the fire the townsfolk set about rebuilding the town. The rebuilding made Holt notable for its abundance of Georgian buildings, that being the style of the day at the time when the town centre was rebuilt. However, the town repaired and retains its Norman parish church, which is dedicated to St Andrew. It has been noted that if the town of Holt had not been destroyed by the fire in 1708 it would now look very similar to the town of Lavenham in Suffolk.

1–3 Shirehall Plain – The building is thought to be the oldest house in Holt (the cellar dates back to the 15th century), a survivor of the great fire of Holt in 1708 and a further fire in the building in 1906. The premises traded as a hardware shop or ironmonger's for over 100 years under the ownership of the Byford family. Byford's is now run as a café, delicatessen and B&B.

Blind Sam is the name given locally to the Queen Victoria Jubilee Lantern located in Obelisk Plain. From the year of Victoria's Golden Jubilee in 1887 until 1921 it stood in the Market Place, where it had two functions, to provide light to the Market Place and to provide drinking water from two fountains at the bottom. The light was powered by the town's gas supply, which at the time was sporadic and unreliable, hence the nickname "Blind Sam". It was moved to Obelisk Plain in 1921 to make way for the war memorial. Made by ironmongers in Glasgow, it was restored locally in the 1990s.

The pineapple-topped obelisk at Holt is one of a pair gateposts from Melton Constable Park, the other having been given to the town of Dereham in 1757. Each gatepost had the distances to various places from Holt and Dereham respectively carved into the stone. At the start of the Second World War, to avoid assisting the enemy in the event of invasion, the townspeople of Dereham dumped their obelisk down a deep well, where it remains to this day. The people of Holt whitewashed their obelisk at the start of the Second World War and it remains in good condition and a cause of great interest.

The town's water was pumped from the common land at Spout Hills to the water tower in Shirehall Plain. The tower was made from bricks, built in 1885 and was 56 ft (17 m) high. It held around 150,000 gallons of water and the water level inside the tank could be read from the ground. The tower was demolished in the 1950s.

A brick-built windmill was erected in the late 18th century: when put up for sale in the summer of 1792 it was described as "newly built". It was used by many different owners until the early 1920s. The sails were removed in 1922 and the rest of the machinery was removed in the 1930s. The brick tower was then used for storage until deemed unsafe. The brick tower was demolished in the 1970s. There are now homes on the site, known as Mill Court.

On 19 August 1968, two Royal Air Force jet aircraft collided at 14,500 ft (4,400 m) over the town of Holt. All seven crew from both aircraft were killed. A memorial stone hangs inside Saint Andrew's Church.

Holt Country Park is a short walk from the town. It has had a chequered history, including a horseracing course, heath, farmland, forestry and woodland garden. It has now been developed into a tranquil woodland dominated with Scots pine and native broadleaves. Its rich ground flora supports an abundant display of wildlife including deer. The park has achieved a Green Flag Award every year since 2005. The park is very popular with school and families where they join in environmental and arts events throughout the year. The park has many amenities that include two car parks, visitor centre and public toilets, way-marked routes suitable for walkers and wheelchairs and pushchair users. There is also orienteering posts in the park for groups to use. The park is free to the public with a small charge for parking. 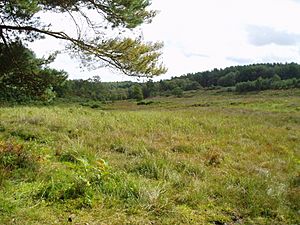 The Lowes is an area of heathland of around 120 acres (0.49 km2) to the south of Holt set aside by the Inclosure Act of 1807. The poor of Holt had grazing rights for an animal and also had the right to take wood and gorse from the land for their own use. It is likely that the land was never used by the poor of Holt as the land was not wholly suitable. The Lowes was used for military training during the First World War. It is open to the public along with Holt Country Park. The Lowes has long been recognised as an important area for wildlife, with records going back to the 18th century. It was declared an SSSI in 1954 and for a while managed as a nature reserve by the Norfolk Wildlife Trust, which continues to act as managing agents for the trustees. As on all lowland heaths, there is a constant need for management to prevent the encroachment of trees. Recent work has concentrated on clearing a large part of the mixed valley mire, an area of sphagnum bog that supports plants like sundews and several species of dragonfly, including one, the keeled skimmer, found nowhere else in East Anglia.

These consist of 14 acres (57,000 m2) of green space, which provided the town of Holt with all of its water needs, enabling it to grow and flourish. An old reservoir still exists but the pumping station was dismantled in the 1950s. A working party is currently restoring and conserving the hills for future generations by removing scrub, keeping the pastures clear and managing the woodlands which have grown up over the last 50 years.

The Holt Summer Festival started in 2009 is an arts festival. The event runs for a week and included music, theatre, literature, cinema and art.

Holt's Christmas lights are seen by many people as the best in the county and bring people to the town from near and far throughout November and December. The Holt Christmas lights have been running for a number of years and are accompanied by a number of other attractions in the town centre, mainly sponsored by local people and businesses. The lights switch on night is usually followed by local radio and television coverage in the last week of November.

The Doctor Who events

On Sunday 25 June 2006, Holt was "invaded" by Daleks. The event was a celebration of BBC Television's classic science fiction series Doctor Who. The Doctor Who Midsummer Invasion attracted many fans of the ever-popular show to the town as well as some of its previous stars. Organised by Planet Skaro, a local sci-fi store that has subsequently closed, the highlight of the day was a Dalek parade through the town centre.

The Doctor Who themed events proved very popular, the Sunday especially so, with over 10,000 people visiting the town.

Due to the success of the first Invasion, another science fiction themed event took place in Holt on 30 June 2007.

Holt has a Rugby football club, formed in 1961. The club's first match was played against West Norfolk on Gresham's School playing field. In the early days the team used the White Lion Hotel (now closed) for their changing rooms and hospitality. In 1967 the club was able to purchase 9 acres (3.6 ha) of land on the eastern side of Bridge Road in nearby High Kelling. The club began playing their home games at their new facilities in 1969. At Bridge Road the club has three full-size pitches, six dedicated mini pitches and a clubhouse which was built in 1970. There are changing room facilities for up to 100 players. The club has three senior sides, a junior side and mini rugby sides for age 6 to 12-year olds.

Holt United Football Club has a longer history than the rugby club. It was formed in 1894 and was a founder member of the North Norfolk and Norwich League, which began in 1895. In 1927 the club joined the Norwich and District League and went on to win this league on five occasions. In 1935 the club was in the Norfolk and Suffolk League and did not suffer a league defeat until December that year, when they lost to Norwich City A at Carrow Road. Holt was the first amateur team to play at the newly built Carrow Road ground. In 1985 Holt United left their ground at Jubilee Road, which was sold to finance the new Sports Centre complex on Kelling Road. For one season Holt played their matches at Gresham's School. In 1986 the club moved to their new ground at the Sports Centre. Four years later they dropped into junior football. During the past three seasons the club have remained in Division One of the Anglian Combination. At present Holt United runs three sides, the first team playing in the Anglian Combination and the Reserves and colts teams in the North East Norfolk League.

All content from Kiddle encyclopedia articles (including the article images and facts) can be freely used under Attribution-ShareAlike license, unless stated otherwise. Cite this article:
Holt, Norfolk Facts for Kids. Kiddle Encyclopedia.