Kids Encyclopedia Facts
Not to be confused with Feckenham.

Fakenham is a market town and civil parish in Norfolk, England. It is situated on the River Wensum, about 25 miles (40 kilometres) north west of Norwich. The town is the junction of several local roads, including the A148 from King's Lynn to Cromer, the A1067 to Norwich and the A1065 to Swaffham.

Fakenham has been a market town since 1250, particularly known for its corn, barley and wheat trading, and in the 19th century it became noted for its printing. Fakenham Racecourse is a thoroughbred horse racing venue to the south of Fakenham, of which Charles, Prince of Wales is patron.

The town has a long name of Fakenham Lancaster which derives from the ownership of the manor in 1377 being transferred to John of Gaunt, the Duke of Lancaster. The name continues to be used today, including on recently placed history trail plaques around the town, and also the two wards that cover the town, for the purpose of electing councillors to North Norfolk District Council, are called Lancaster North and Lancaster South.

In 1086 (Domesday Book) Fakenham had only 150 residents. Hempton, on the opposite side of the river, was the larger community and had an abbey that played host to pilgrims on their way to Walsingham. Fakenham became the dominant centre when the abbey was dissolved by Henry VIII. It has been a market town since 1250, when it was given a charter. The stalls probably occupied space around the parish church of St. Peter & St. Paul. Fakenham's modern-day Thursday market is still situated very close to its original positioning and around the market place.

Its major industry in the 19th and 20th centuries was printing, but the major printworks (Cox and Wyman) closed in the 1970s. Nevertheless, there are still more than ten small printing firms in industrial premises around and near the town. A large number of printing blocks have been set into the surface of the market place as a memorial to this lost industry.

In the late 1990s the town was listed by contributor Robert Woods to The Knowhere Guide as "the most boring place on Earth". The contribution was specifically referring to Wednesday afternoon which is 'early closing' day in Fakenham. This comment, made by Woods, was taken and quoted out of context as 'voted' the most boring place on Earth" and very rapidly the story was running in national newspapers with the town council defending the town and spending considerable time, money and effort trying to prove that this was not the case. Fakenham was recently voted the seventh best place to live in Britain in Country Life's quality of life survey.

Recent investment in Fakenham has seen the town centre being renovated and pedestrianised. It now enjoys a popular farmers' market on the morning of the 4th Saturday of each month.

Fakenham is now the home of Kinnertons Chocolate employing some 700 people. Established in 1978, Kinnerton Confectionery is now Britain's largest manufacturer of chocolate and novelty confectionery specialising in character licensing.

The town was the base for North Norfolk's first independent commercial radio station, FTR FM, broadcasting for a short period between 4 and 30 August 1997, using an RSL broadcast licence. Other RSL radio stations followed, between November 1998 and May 2001, including FCR 107.2 and Central Norfolk Radio.

On 25 May 2014 the historical Aldiss building, which had been a feature of Fakenham town centre for many decades, was destroyed by fire. The building was at the time host to the Original Factory shop, after the Aldiss outlet had been moved in the 1990s. There is a currently a petition circulating around the local area for the site to be cleared and remain free of new building work, due to the scenic view of the local church now visible from the town square.

Fakenham Parish Church was built in the 14th Century and replaced an earlier Saxon Church.

Attractions in the town include Fakenham Racecourse and the Museum of Gas and Local History.

The Fakenham Museum of Gas and Local History is the only surviving town gasworks in England and Wales, complete with all equipment used for the manufacture of gas from coal: retorts, condenser, purifiers, meter and gasholder.

In 1913 a council school was built on Queen's Road to replace these and all the children moved there, being separated into the boys', girls' and infants' schools provided within the one complex.

The town is presently served by a purpose-built infant school, a junior school on Queen's Road, and Fakenham Academy on Field Lane.

1st Fakenham Scouts were established on 3 May 1923, with their headquarters listed as being on Bridge Street. The group was re-registered on 21 October 1948 as part of the North West Norfolk District. At this time the group was meeting at the Congregational Schoolroom on Norwich Road, which is now part of an antique centre. On 1 April 1968, 1st Fakenham Scout Group, now a part of the Fakenham District, asked for permission to change their name to Fakenham Wensum Scout Group.

Girlguiding UK has several active groups in the town. 1 Guide unit, 2 brownie units and 1 Rainbow unit. They are part of the Gallow District and the North West Norfolk Division.

The town is the home of 2534 Squadron, Air Training Corps, who parade at Fakenham College.

The Britannia Army Cadet Force parade at their headquarters, which is at Fakenham Community hall. Parading on Tuesday nights from 7:00PM to 9:30PM

Fakenham Town Band is a thriving traditional brass band based in Fakenham. It was established in 1881 and has enjoyed continuous existence since.

'Fakenham' is the alias that the character Redmond Barry adopts after deserting his regiment and impersonating a messenger in the Stanley Kubrick film Barry Lyndon.

The setting of Super Hans' wedding in the second episode of the 9th series of Peep Show.

Fakenham has been a market town since 1250. Agricultural products and cattle have long been sold at the town's Corn Hall and flea market. John Chambers wrote in his A General History of the County of Norfolk: (1829): "Fakenham is a small town, with a good corn market, attended by buyers from Wells, and other contiguous ports. The general market here is on Thursdays, when a large quantity of barley and wheat are sold by samples".

During the 19th century, Fakenham became a major centre for printing, which continued into the 20th century. Fakenham Prepress Solutions is a contemporary printing and illustratrating company based in Fakenham. The Kinnerton Confectionery Company was established in the town in 1978.

Fakenham Cricket Club is one of the oldest in Norfolk; it started in 1815 with a combined team, including Hempton and Walsingham, and formed in its own right in 1883. The 1st team of the club won the Norfolk Alliance Premier Division league title in 2001, 2011, 2015 and 2018; also the Carter Cup in 2010. Queens Road Recreation Ground is a recreational ground in the centre of Fakenham.

Fakenham Golf Club, on the southern outskirts of the town on the southern side of the Wensum, was originally established in February 1889. The present 6,245 yard course was designed in 1974.

Fakenham Racecourse is a thoroughbred horse racing venue to the south of the town. Charles, Prince of Wales is patron. It is the venue for the West Norfolk Hunt's Point to Point steeplechase. 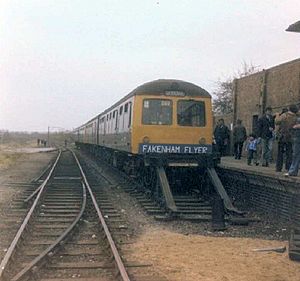 Fakenham is not currently served by the railway network, however it previously had two railway stations. Fakenham East, opened as Fakenham on 20 March 1849, was the terminus of the Wymondham to Wells Branch railway. The line was extended to Wells-next-the-Sea in 1857 and the station was renamed to Fakenham East in 1948. It was proposed for closure in the 1963 Beeching Report. Fakenham West opened in 1880 and closed in 1959. It was built as part of the Midland and Great Northern Joint Railway main line that meandered across Norfolk from King's Lynn to Sheringham, Cromer, Norwich and Great Yarmouth. There was no connection between the two railway lines: the line south of Fakenham West crossed the line from Fakenham East south of the former station, on a girder bridge that still exists immediately north of a three-span bridge over the River Wensum.

Following Fakenham East's closure on 5 October 1964 to passengers, the line remained opened for goods. A special passenger service named the Fakenham Flyer ran on 21 April 1979, but this proved to be the only such instance, as the line closed permanently the following year.

The town is at the junction of several local roads, including the A148 from King's Lynn to Cromer, the A1067 to Norwich and the A1065 to Swaffham. A single-carriageway bypass was constructed in the mid-1980s to carry the A148 to the north of the town.

Notable people from Fakenham include:

Other notable people from the town include footballing brothers Ryan Jarvis and Rossi Jarvis, formerly of Norwich City and Adam Tann, whose League career ended at Chelmsford City and is the cousin of the Jarvis brothers. Another former Norwich City footballer, Matt Gill, grew up in the town and attended the local junior school and high school.

All content from Kiddle encyclopedia articles (including the article images and facts) can be freely used under Attribution-ShareAlike license, unless stated otherwise. Cite this article:
Fakenham Facts for Kids. Kiddle Encyclopedia.