Swaffham is a market town and civil parish in the Breckland District and English county of Norfolk. It is situated 12 miles (19 kilometres) east of King's Lynn and 31 miles (50 kilometres) west of Norwich.

Its name came from Old English Swǣfa hām = "the homestead of the Swabians"; some of them presumably came with the Angles and Saxons.

By the 14th and 15th centuries Swaffham had a flourishing sheep and wool industry As a result of this prosperity, the town has a large market place. The market cross here was built by George Walpole, 3rd Earl of Orford and presented to the town in 1783. On the top is the statue of Ceres, the Roman goddess of the harvest.

About 8 km to the north of Swaffham can be found the ruins of the formerly important Castle Acre Priory and Castle Acre Castle.

On the west side of Swaffham Market Place are several old buildings which for many years housed the historic Hamond's Grammar School, as a plaque on the wall of the main building explains. The Hamond's Grammar School building latterly came to serve as the sixth form for the Hamond's High School, but that use has since ceased. Harry Carter, the grammar school's art teacher of the 1960s, was responsible for a great number of the carved village signs that are now found in many of Norfolk's towns and villages, most notably perhaps Swaffham's own sign commemorating the legendary Pedlar of Swaffham, which is in the corner of the market place just opposite the old school's gates. Carter was a distant cousin of the archaeologist and egyptologist Howard Carter who spent much of his childhood in the town. 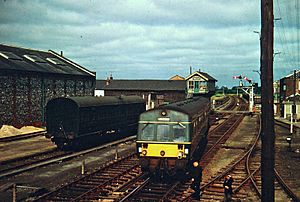 Swaffham under the Eastern Region of British Rail.

Until 1968 it was served by Swaffham railway station on the Great Eastern Railway line from King's Lynn. Just after Swaffham, the line split into two, one branch heading south to Thetford, and the other east towards Dereham. The railways were closed as part of the Beeching Axe, though the possibility of rebuilding a direct rail link from Norwich to King's Lynn via Swaffham is occasionally raised.

The Swaffham Museum contains an exhibition on local history and local geology as well as an Egyptology room charting the life of Howard Carter. 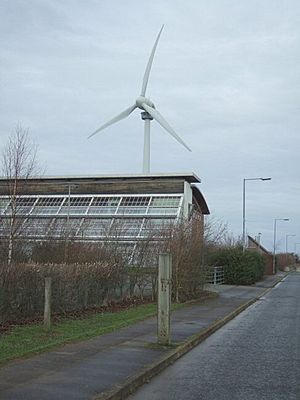 Today the town is known for the presence of two large Enercon E-66 wind turbines, and the associated Green Britain Centre, formerly known as the Ecotech Centre. The Green Britain Centre's displays focus on green energy (including solar and wind power), transportation options without oil, and organic gardening.

The turbines are owned and operated by Ecotricity, and together generate more than three megawatts. One wind turbine, an Enercon E66/1500 with 1.5 MW generation capacity, 67 metres nacelle height and 66 metres rotor diameter, which was built in 1999, has an observation deck just below the nacelle - it remains the only wind turbine in the world that is open for the public to climb. These have now been joined by a further eight turbines at North Pickenham, though not owned by Ecotricity.

The Green Britain Centre hosted the 2008 British BASE jumping championships; contestants jumped from the roof of the observation deck.

The church of Saint Peter and Saint Paul is one of only a few churches that have angels carved in wood instead of stone around the top of the walls. The current building, dating from 1454, is built on the foundation of the original church. A wood carving of the “Pedlar of Swaffham” is also in the church.

In the summer of 2006, location filming was done in the town for the ITV1 series Kingdom, starring Stephen Fry. In Kingdom the town is called Market Shipborough. The pub the Startled Duck in the TV series is better known as the Greyhound Inn in which the Earl of Orford created the first coursing club open to the public in 1776. Kingdom's office is filmed in Oakleigh House, near the town square (formerly the house of the Head Master of Hamond's Grammar School), with the coastal scenes filmed at Wells-next-the-Sea on the north Norfolk coast.

Swaffham is one of the many locations for The Man Who Became Rich through a Dream folk tale (Aarne-Thompson type 1645). The tale tells of a pedlar from Swaffham who dreamed for several consecutive nights that if he waited on London Bridge he would eventually hear good news. He travelled to London, and waited for several days on the bridge. Eventually a shopkeeper asked him why he was waiting, and the man told of his dream. The shopkeeper laughed, and replied that he often dreamed that if he went to a certain orchard in Swaffham and started digging, he would find buried treasure. The pedlar returned to Swaffham, and found the treasure.

Until 1968 the town was served by Swaffham railway station on the Great Eastern Railway line from King's Lynn. Just after Swaffham, the line split into two, one branch heading south to Thetford, and the other east towards Dereham. The railways were all closed as part of the Beeching Axe, though the possibility of rebuilding a direct rail link from Norwich to King's Lynn via Swaffham is occasionally raised.

The east–west A47 Birmingham to Great Yarmouth road now avoids the town, using a northerly bypass opened in 1981. The A1065 Mildenhall to Fakenham road still passes through the centre of the town on its north–south route, intersecting with the A47 at a grade separated junction north of the town.

All content from Kiddle encyclopedia articles (including the article images and facts) can be freely used under Attribution-ShareAlike license, unless stated otherwise. Cite this article:
Swaffham Facts for Kids. Kiddle Encyclopedia.