Wells-next-the-Sea is a port town on the North Norfolk coast of England.

Wells is 15 miles (24 km) to the east of the resort of Hunstanton, 20 miles (32 km) to the west of Cromer, and 10 miles (16 km) north of Fakenham. The city of Norwich lies 32 miles (51 km) to the south-east. Nearby villages include Blakeney, Burnham Market, Burnham Thorpe, Holkham and Walsingham.

The name is Guella in the Domesday Book (half gallicised, half Latinised from Anglian Wella, a spring). This derives from spring wells of which Wells used to have many, rising through the chalk of the area. The town started to be known as Wells-next-the-Sea in the early 19th century to distinguish it from other places of the same name. When the Wells and Fakenham Railway was opened on 1 December 1857, the terminus was given the name of "Wells-on-Sea". In 1956 the Wells Urban District Council voted to (re-)adopt the name Wells-next-the-Sea, and this has been the official name since then.

The North Sea is now a mile from the town, as a result of the silting of the harbour. The Holkham Estate reclaimed some 800 hectares of saltmarsh north-west of Wells, completed by the construction of a mile-long sea-wall in 1859. This reclamation reduced the tidal scour and is itself a further cause of silting. The town has long thrived as a seaport and is now also a seaside resort with a popular beach that can be reached on foot or by a narrow gauge railway that runs partway alongside the mile-long sea wall north of the harbour. The beach is known for its long flat terrain, abstract sand dunes and varied unique beach huts. A land-locked brackish pool called Abraham's Bosom is used for pleasure boating and canoeing. The beach is backed by dense pine woods which are part of the Holkham National Nature Reserve. The woods comprise Scots pine, Maritime pine and Corsican Pine growing on sand.

More pinewoods exist to the east of the beach over the shipping channel at an area called the East Hills. This can be accessed on foot at low tide though all of the tidal sands in the area are extremely dangerous due to the speed and currents of the rising tide. It is not advisable to cross the channel without detailed local knowledge.

The town stretches nearly a mile inland. The majority of shops and other such businesses are now found on Staithe Street but up to the 1960s commercial premises were also to be found along High Street which continues south towards St Nicholas's Church. The church burned after a lightning strike in 1879: the exterior shows the original stonework, but the interior is sparse and lacks interest. John Fryer, Captain Bligh's sailing master on HMS Bounty was born at Wells, and is buried in the churchyard.

The distinctive landmark of the seafront is the granary with its overhanging gantry on the quay, started in 1902 and finished in 1904. This has now been converted into flats, having ceased operating as a granary in 1990. The maritime tradition of the town meant it used to have a remarkable number of public houses for a town of its size although many of these have since closed. The northern end of the town used to be notable for parallel "yards", narrow rows of cottages similar to the northern "ginnels", which could be relics of Danish occupation. These were largely lost in the terrible 1953 flood damage, and subsequent "slum clearance". The 1953 flood affected the northern edge of the town as well as destroying the pine forest which had fringed Abraham's Bosom. Today there is a large moving flood gate next to the harbour car park and many of the houses have their own flood defences.

A feature of the town is the area known as The Buttlands, a large green ringed by lime trees. Large elegant Georgian houses overlook The Buttlands, as do the Crown Hotel, Globe Inn and the Wells Catholic Church. If you exit The Buttlands down the hill at its south-west corner you can see Ware Hall, which was rebuilt over a period of years from the 1970s by Miss May Savidge, who brought it in parts when she moved from Ware in Hertfordshire. It was a significant port in the sixteenth century with 19 ships over 16 tons burden operating out of Wells in 1580, making it the major port in the area: the main trade was corn.

The current lifeboat station, housing both an all-weather lifeboat and an inshore rescue boat, is at the harbour entrance. The old lifeboat house, now used as the harbour offices, is at the western end of the quay

In 1880, Wells was the scene of a lifeboat disaster in which 11 of the 13 lifeboat crew drowned, leaving 10 widows and 27 children without fathers. A memorial to the crew stands adjacent to the old lifeboat house.

Prime Minister, David Cameron, visited the town on 9 December 2013 to inspect the damage created by a storm surge. Numerous homes and businesses were affected by the highest tide recorded in the town on 5 December 2013.

Various charity schools in the town included that set up by Christopher Ringer in 178? when he left £600 in his will for the education of thirty boys and thirty girls in the town. A number of academies were established in the nineteenth century; none of these survive. A National School was set up following the closure of the town workhouse. A British School was set up in 1938 which became a Board School in 1875. A secondary school was built in 1929 when the original school became the primary school. The primary school closed in 1964 when the Alderman Peel secondary modern school was built in a different part of town adjacent to the old Heacham railway line. The old school buildings were used for some years as a field studies centre but have now been converted to social housing units. Wells schools are now part of the Wensum Trust which administers 24 schools in Norfolk. 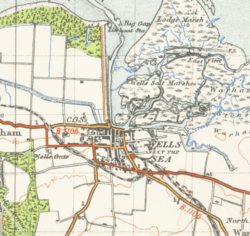 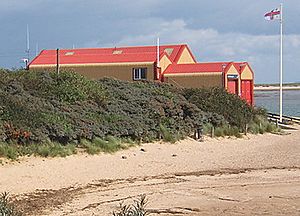 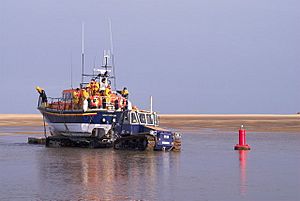 Wells-next-the-Sea lifeboat being towed to the lifeboat house

The coming of the railway in 1857 notably reduced the town's population, as mentioned in the 1861 census. Formerly the town was served by Wells-on-Sea railway station and was connected to the British Rail network by two lines. The line westwards towards King's Lynn was never reinstated after damage in the North Sea flood of 1953, while the line to Norwich via Fakenham, Dereham and Wymondham was a victim of the 'Beeching Axe' of the 1960s. The Wells and Walsingham Light Railway, a 10¼ inch-gauge railway (the longest of such a gauge in the world), now uses part of the track-bed and has its own separate Wells railway station.

In addition to the two passenger railway routes in and out of the town, there was a tramway from the station to the quayside at Wells Harbour, whose rails are still visible today just beneath the modern road surface. Locomotives were not allowed along the quay and waggons were hauled by horses. The line continued in a curve to the south, and the track bed can be walked.

The Wells Harbour Railway was a separate 10¼ inch-gauge railway that took passengers from the harbour behind the sea wall towards the beach and caravan site. It was in operation from 1976 to 2021 when the lines were taken up.

Wells was located on the high-profile 'Coasthopper' bus route between King's Lynn and Cromer. In April 2018, Stagecoach ceased operations in Norfolk. The Coasthopper service was split into two sections at Wells-next-the-Sea: the section from King's Lynn to Wells was rebranded as the Coastliner 36, extended inland from Wells to Fakenham, and taken over by Lynx; while the section from Wells to Cromer was branded as the 4 and taken over by Sanders Coaches.

All content from Kiddle encyclopedia articles (including the article images and facts) can be freely used under Attribution-ShareAlike license, unless stated otherwise. Cite this article:
Wells-next-the-Sea Facts for Kids. Kiddle Encyclopedia.