Hunstanton is a seaside town in Norfolk, England, which had a population of 4,229 at the 2011 Census. It faces west across The Wash, making it one of the few places on the east coast of Great Britain where the sun sets over the sea. Hunstanton lies 102 miles (164 km) north-north-east of London and 40 miles (64 km) north-west of Norwich. 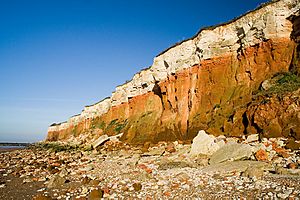 The stratified red chalk limestone and white chalk cliffs on the beach at Old Hunstanton.

The coastal cliffs include the type section of the Hunstanton Formation of lower reddish limestone which was laid down during the Lower Cretaceous. This is topped by a white chalk layer from the Upper Cretaceous epoch. 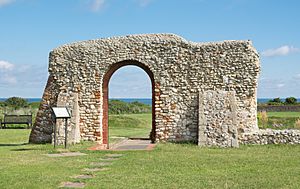 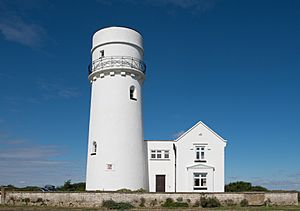 Hunstanton is a 19th-century resort town, initially known as New Hunstanton to distinguish it from the adjacent old village from which it took its name. The new town soon exceeded the village in scale and population.

The original settlement of Hunstanton, now known as Old Hunstanton, probably gained its name from the River Hun, which runs to the coast just to the east of Old Hunstanton. It has also been opined that the name Hunstanton originated from the word "Honeystone", a reference to the local red carr stone. The river begins in the grounds of Old Hunstanton Park which surrounds the old moated hall, the ancestral home of the Le Strange family. Old Hunstanton village is of prehistoric origin and lies near to the head of Peddars Way. In 1970, evidence of Neolithic settlement was found. The quiet character of the village remains distinct from its busy sibling and complements it with clifftop walks past a privately owned redundant lighthouse and the ruins of St Edmund's Chapel, built in 1272.

In 1846, Henry Styleman Le Strange (1815–1862), decided to develop the area south of Old Hunstanton as a sea-bathing resort. He persuaded a group of like-minded investors to fund the construction of a railway line from King's Lynn to the town, to bring tourists and visitors. This was a great success – the Lynn & Hunstanton Railway became one of the most consistently profitable railway companies in the country. In 1861, Le Strange, as principal landowner, became a director of the railway company and by 1862 the line had been built. Hunstanton was ready to take off commercially. However, Le Strange died in the same year at the age of 47 and it was left to his son Hamon to reap the rewards of his efforts.

As a mark of his intentions, Le Strange had moved the ancient village cross from Old Hunstanton to the new site in 1846, and in 1848 the first building was erected. This was the Royal Hotel (now the Golden Lion), the work of the renowned Victorian architect, William Butterfield, a friend of Le Strange. Overlooking a sloping green and the sea, and for several years standing alone, it earned the nickname "Le Strange's Folly". In 1850 Le Strange, an amateur architect and painter, appointed a land agent to survey the site and prepare a plan, while he himself drew and painted a map and a perspective of the scheme, showing shops, a station and a church. He consulted William Butterfield on the design of the development plan. Their shared passion was for the "Old English" style of architecture for domestic buildings. This owed much to medieval precedent and to the earnestness of the Victorian Gothic Revival. Hunstanton is the exemplar of a model 19th-century estate seaside town. Most of the fabric and character of that original development survives. 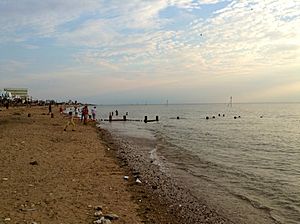 Hunstanton Beach at dusk in August 2013

Hunstanton is a traditional family resort. Summer crowds tend to be smaller now than in the 1980s, although the popularity of the town as a tourist destination for day-trippers and holidaymakers has endured, weathering the decline of the British seaside holiday. During the 1990s, businesses in villages south of Hunstanton (Dersingham, Ingoldisthorpe and Snettisham) complained of a loss in trade after being bypassed by the A149, which carries heavy Hunstanton-bound traffic. 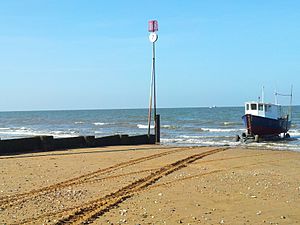 Looking out to the Wash from Hunstanton.

The town contains several stately Victorian squares. Boston Square provides a view across the Wash to Boston in Lincolnshire. On a clear day, one can see the Boston Stump.

Hunstanton is home to a fairground, aquarium and seal sanctuary, leisure pool, theatre, large caravan parks with amenities (Searle's Holiday Park opened in 1936), a number of amusement arcades and a long promenade. In good weather, boats run by Searle's carry tourists out to view both grey and common seals that have colonised sand bars in the Wash and to the north of Norfolk. The centrepiece of the town remains the large sloping green, which runs from one end of High Street to the promenade.

The town boasted a Victorian pleasure pier, with fine attractions, including a pavilion and miniature steam railway running up and down it. The pier pavilion was destroyed by fire in 1939, the pier was damaged by fire again in the 1950s, before almost the entire structure was washed away by a fierce storm in 1978. What remained of the pier extended just fifteen feet outwards from the amusement arcade and cafe that was built on the site of the original entrance. In 2002, the entire building, as well as the remains of the pier, were destroyed in a fire. As the building was so badly damaged, firemen could not determine the cause of the fire. Today, a new arcade and bowling alley complex occupies the site.

Hunstanton has regular markets on Wednesdays and Sundays selling fresh fish and fresh fruit and vegetables. The markets attract greater numbers in the summer months through to the autumn. The principal shopping streets of the town have stone buildings, some with glazed canopies, evoking the Victorian and Edwardian eras of their construction and retaining a mixture of outlets including England's largest joke shop.

The countryside surrounding Hunstanton is hillier than most of Norfolk and is sparsely populated, the only nearby large settlement being King's Lynn, 12 miles (19 km) to the south.

The town is linked to King's Lynn by a frequent Lynx bus service. Other services run to Sandringham, Wells-next-the-Sea, Sheringham and Cromer.

Hunstanton railway station offered services to King's Lynn until 1969, when the line was closed as uneconomic.

The Princess Theatre is a 472-seat venue, open all year round, hosting a wide variety of shows from comedy to drama, music for all tastes and children’s productions. The venue also has a six-week summer season and an annual Christmas pantomime. Films are screened during the week.

The theatre opened as the Capitol Cinema in 1932 and is noted for its construction in Norfolk carr stone as it contains the largest gable wall of carr stone in existence. It was designed as a theatre as well as a cinema but closed in the 1960s and was sold in 1974. It changed its name to the Kingsley Centre and provided summer seasons and films for approximately two years but declined and eventually operated as a bingo hall. After some time it closed again until the Borough Council of King's Lynn and West Norfolk purchased it in 1981. In honour of Lady Diana Spencer who, on her marriage to the Prince of Wales in July 1981, became the Princess of Wales, the theatre was renamed the Princess Theatre. It was officially re-opened on 5 July 1981.

Hunstanton Concert Band plays at events in and around Hunstanton performing at a wide variety of venues including churches, fêtes, concerts and the town's band-stand. The Deaf Havana album Fools and Worthless Liars featured a track called "Hunstanton Pier", a nostalgic recollection of the town where James Veck-Gilodi, the band's lead singer, grew up. 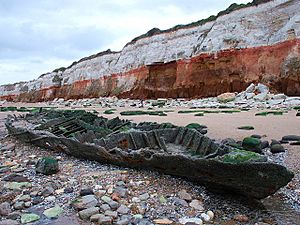 Wreck of the Sheraton

Between the world wars P. G. Wodehouse frequently visited his friend Charles Le Strange at Hunstanton Hall and it became an influence for a number of the locations in his comic novels. It became Aunt Agatha's country seat Woollam Chersey and also the inspiration for the setting for Money for Nothing (1928). The octagon in the garden also featured in "Jeeves and the Impending Doom". Norfolk also furnishes the names of many of the colourful characters in the books e.g. Lord Brancaster, Jack Snettisham and J. Sheringham Adair.

L. P. Hartley knew Hunstanton and the surrounding area well from childhood holidays and he used it as a setting for The Shrimp and the Anemone (1944 – the first novel in his Eustace and Hilda trilogy). It is at Hunstanton Hall (fictionalised as Anchorstone Hall) that Eustace enters the privileged world of the aristocracy and eventually inherits a small fortune. The famous layered cliffs at Hunstanton (consisting of chalk, red chalk and Carr stone) also provide the backdrop for Eustace and Hilda's games among the rock pools.

Patrick Hamilton's novel Hangover Square opens with George Harvey Bone walking on the cliffs in Hunstanton. Hamilton lived for many years at Martincross in Sheringham and also spent some time in the 1930s in a cottage in Burnham Overy Staithe living there with his first wife, Lois. 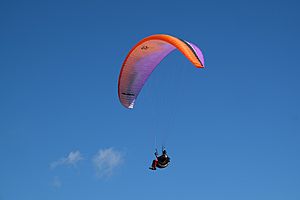 Paragliding above the cliffs in Hunstanton

Hunstanton attracts thousands during a week in August, for the ITA Hunstanton Lawn Tennis tournament – the biggest in England after Wimbledon, inaugurated in 1920. All ages can play from the young (Under 8 Round Robin) to senior veterans. It acts also as a big social event.

Hunstanton Golf Club, founded in 1891 by Hamon Le Strange, is an 18-hole championship links along the sandy coast of Old Hunstanton. It has a classic "out and back" design on either side of a central spine or dune ridge. The 12th, 13th and 14th holes play across the ridge.

The Smithdon High School (formerly Hunstanton Secondary Modern School) is an early building designed by the architects Peter and Alison Smithson, built in 1949–1954 in a radical style of international architectural significance. It is a Grade II* listed building.

The school epitomised architectural experiment in post-war Britain and growing acceptance of modernism by public authorities. It was praised for an intelligent layout and formal elegance. The Smithsons deliberately left many of the service elements of the school exposed, making a feature of the water tank by turning it into a tower. The disposition, steel frames and panels of brick and glass echo the work of Mies van der Rohe at the Massachusetts Institute of Technology.

All content from Kiddle encyclopedia articles (including the article images and facts) can be freely used under Attribution-ShareAlike license, unless stated otherwise. Cite this article:
Hunstanton Facts for Kids. Kiddle Encyclopedia.