Sandringham is a village and civil parish in the north of the English county of Norfolk. The village is situated 2 kilometres (1.2 mi) south of Dersingham, 12 km (7.5 mi) north of King's Lynn and 60 km (37 mi) north-west of Norwich.

The civil parish extends eastwards from Sandringham village to the shore of the Wash some 6 km (3.7 mi) distant, and includes the villages of West Newton and Wolferton. It has an area of 41.91 km2 (16.18 sq mi) and in 2001 had a population of 402 in 176 households. The population had increased to 437 at the 2011 Census. For the purposes of local government, the parish is in the district of King's Lynn and West Norfolk.

Sandringham is best known as the location of Sandringham House and its estate, a favoured holiday home of Queen Elizabeth II and several of her predecessors. Near to the house is the Royal Stud, a stud farm that houses many of the royal horses. The village was the birthplace of Diana, Princess of Wales.

In terms of public transport, Sandringham is served by bus route 35 between King's Lynn and Hunstanton, operated by Lynx. 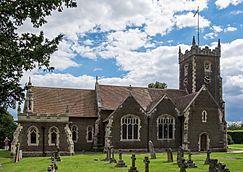 All content from Kiddle encyclopedia articles (including the article images and facts) can be freely used under Attribution-ShareAlike license, unless stated otherwise. Cite this article:
Sandringham, Norfolk Facts for Kids. Kiddle Encyclopedia.