Dereham (/ˈdɪərəm/), also known as East Dereham, is a town and civil parish in the English county of Norfolk. It is situated on the A47 road, some 15 miles (25 km) west of the city of Norwich and 25 miles (40 km) east of King's Lynn. The civil parish has an area of 21.51 km2 (8.31 sq mi) and in the 2001 census had a population of 15,659 in 6,941 households, the population at the 2011 Census increasing to 18,609. For the purposes of local government, Dereham falls within, and is the centre of administration for, the district of Breckland. The town should not be confused with the Norfolk village of West Dereham, which lies about 25 miles (40 km) away.

Since 1983 Dereham has been twinned with the town of Rüthen in North Rhine-Westphalia, Germany. It is also twinned with Caudebec-lès-Elbeuf, France. 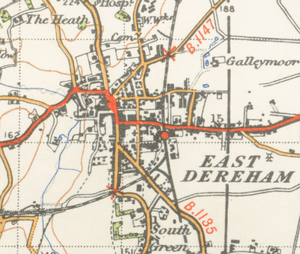 A Neolithic polished greenstone axe head was found near the town in 1986, with a Neolithic axe head, flint scraper and other tools and worked flints also found in local fields during the 1980s. There is evidence that the area was occupied during the Bronze Age, with burnt flints from a pot boiler site being found in 1976 and another burnt mound site located in 1987.

In 2000, an enamelled bridle bit dating from the Iron Age was discovered, with pottery sherds also being found by field walkers in 1983. The town is believed to be on the Roman Road linking the Brampton with the major east-west Roman Road of the Fen Causeway. Some pottery and furniture remains have been found in local fields.

It is believed that Dereham's name derives from a deer park that existed in the area, although it is known that the town pre-dates the Saxon era. Saint Wihtburh, the youngest daughter of Anna, King of the East Angles, founded a monastery there in the seventh century after seeing a vision of the Virgin Mary; the monastery is mentioned by Bede, but little further is known of it.

Edmund Bonner, later to become the infamous "burning bishop", was the Rector for Dereham from 1534 to 1538. Many of the town's ancient buildings were destroyed in the serious fires that took place in 1581 and 1659. Notable buildings that survived the fire include the Church of Saint Nicholas' and the nearby Bishop Bonner's cottage. Dereham was administered by the Abbots, then the Bishops of Ely, until the parish was taken from the church by Queen Elizabeth I.

In the late 1700s Dereham church's bell tower was used as a prison for French prisoners of war being transferred from Great Yarmouth to Norman Cross under the charge of the East Norfolk Militia. On 6 October 1799 a French officer, Jean de Narde, managed to escape from the tower and, being unable to escape from the church yard due to guards being present, hid in a tree. The Frenchman was spotted and shot when he refused to come down and surrender. Jean is buried in the church yard, and his grave is marked by a memorial stone erected in 1858, which includes the following statement: "Once our foes but now our allies and brethren."

In June 1859 a public meeting was held in the Corn Hall, Dereham, for the formation of a Dereham Rifle Volunteer Corps. The Reverend Armstrong made a short speech urging people to join. About thirty men did, the eldest an elderly fat banker of 70 years, and the youngest a seventeen-year-old. They were kitted out in a grey uniform. The Corps met regularly for drill and exercise. When the Prince and Princess of Wales, and the Queen of Denmark arrived at the town's railway station, the Dereham Rifles attended to form a guard of honour.

Wm. Earle G. Lytton Bulwer, formerly a Lieutenant and Captain in the Scots Fusilier Guards was commanding the Dereham Corps in 1861. In June 1867 the Corps, recorded as the 15th Corps, attended a Volunteer encampment at Hunstanton. The unit was at that time still under the command of Captain Bulwer and formed the tenth tent line. Dereham was the headquarters of 5th, 6th, 11th, 12th, 15th, 16th, 17th, 19th, 23rd and 24th Corps. The Right Hon. Lord Suffield was appointed Honorary Colonel on 18 May 1866.

Dereham suffered damage during a Zeppelin air raid during the night of 8 September 1915. Damaged buildings included the headquarters of the 5th Territorial Battalion of the Norfolk Regiment on the corner of Church Street and Quebec Street. The old Vicarage was used as a Red Cross hospital.

During the Second World War Dereham was declared a Nodal Point and was partially fortified to slow down any German invasion of the country. One surviving pill box, in the railway station yard, is preserved as a memorial by the Royal British Legion. Additional Air Ministry sidings were laid in the town 1943.

The railway arrived in Dereham when a single track line to Wymondham opened in 1847. In 1848 a second line, to King's Lynn was opened. In 1849 a line from Dereham to Fakenham was opened, this line being extended to the coastal town of Wells-On-Sea by 1857. In 1862 the town's railways became part of the Great Eastern Railway. The town had its own railway depot and a large complex of sidings, serving local industry. In 1882 the line between Dereham and Wymondham was doubled, to allow for the increasing levels of traffic.

In 1964 passenger services between Dereham and Wells were withdrawn, and the track between Fakenham and Wells was lifted soon after. In 1965 the line from Dereham to Wymondham was returned to single track, with a passing loop at Hardingham. The line to King's Lynn was closed in 1968, and the last passenger train on the Dereham to Wymondham line ran in 1969 although the railway remained open for freight until 1989.

Dereham labels itself "The Heart of Norfolk" due to its central location in the county, the Tesco car park being cited as the exact centre. In the spring of 1978, the "Heart" was given the seven-mile £5m part-dual-carriageway A47 bypass. A section of this road, between Scarning and Wendling was built along the former railway line towards Swaffham and King's Lynn. This section of railway had been used as a location for the filming of Dad's Army, where Captain Mainwaring is left dangling from a railway bridge after a flight on a barrage balloon.

The railway between Dereham and Wymondham has been preserved, and is now operated as a tourist line by the Mid-Norfolk Railway Preservation Trust. This charitable company also owns the line north towards County School railway station, it has started to gradually reopen the line towards North Elmham and aims to eventually relay the line to Fakenham.

The town lies on the site of a monastery founded by Saint Withburga in the seventh century. A holy well at the western end of St Nicholas' Church supposedly began to flow when her body was stolen from the town by monks from Ely, who took the remains back to their town.

In the 18th century an attempt was made to turn Dereham into a new Buxton or Bath by building a bath house over Withburga's Well. It was described at the time as a hideous building of brick and plaster and was never popular. In 1880 the local vicar, Reverend Benjamin Armstrong obtained permission to pull the building down. The spring was then protected by iron railings, but fell out of use and became choked with weeds. Since 1950, however, it has been kept clear of weeds—although the railings still prevent access to the waters.

Despite the presence of the well and the former monastery, examination of the Withburga story has cast doubt on Dereham being the location of the Saint's abode and resting place. The legend states that monks from Ely came 'up the river' at night and stole her body, taking it back to Ely to rest with her sisters, who were already considered saints. A look at a map will prove this to be an impossibility as there is no river connecting Ely with East Dereham, although it is possible to navigate a river from Ely to West Dereham. Until proved otherwise, Dereham continues to be considered the site of Withburga's home and violated grave.

An area of former railway and industrial land close to the town's station now serves as the location for a number of sports and leisure facilities. The Dereham Leisure Centre, built on the old railway locomotive depot, has a swimming pool, gymn, dance and sports facilities. Open air tennis courts, children's play equipment and a skate park are provided on the nearby Dereham recreation Ground. Strikes also operate a 10 pin bowling alley on the site.

Dereham has a Non-League football club Dereham Town F.C. who play at Aldiss Park. Dereham Rugby Club, based on Moorgate Road, play in the Woodfordes League. Dereham Cricket Club and Dereham Hockey Club are also based in the town. 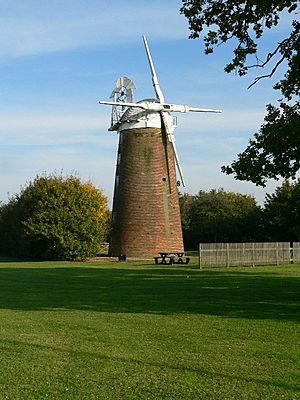 Dereham has two active Scout Groups, both of which are part of The Scout Association. 1st Dereham is notable as one of the earliest Groups set up in the world, having been formed in 1908. In the past there was also a 3rd Dereham Scout Group.

The town is the home of 1249 Squadron, Air Training Corps, who parade at the Cadet Centre on Norwich Road.

The Army Cadets also parade at the Cadet Centre on Norwich Road.

Notable buildings in the town include the pargetted Bishop Bonner's Cottage, built in 1502, the Norman parish church, a windmill which was extensively renovated in 2013 and a large mushroom-shaped water tower. The Gressenhall Museum of Rural Life is nearby. The town also hosts the headquarters of the Mid-Norfolk Railway, which runs trains over an 11.5-mile railway south to Wymondham, as well as owning the line 6 miles north to North Elmham and County School Station.

All content from Kiddle encyclopedia articles (including the article images and facts) can be freely used under Attribution-ShareAlike license, unless stated otherwise. Cite this article:
Dereham Facts for Kids. Kiddle Encyclopedia.