Downham Market sometimes simply referred to as Downham is a market town and civil parish in Norfolk, England. It lies on the edge of the Fens, on the River Great Ouse, some 11 miles south of King's Lynn, 39 miles west of Norwich and 30 miles north of Cambridge.

The civil parish has an area of 5.2 km² and in the 2011 census had a population of 9,994 in 4,637 households. For the purposes of local government, the parish falls within the district of King's Lynn and West Norfolk. It is part of South West Norfolk parliamentary constituency. 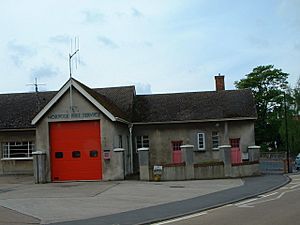 It was an agricultural centre, developing as a market for the produce of the Fens with a bridge across the Ouse. During the Middle Ages, it was famed for its butter market and also hosted a notable horse fair. The market is now held Fridays and Saturdays on the town hall car park.

Notable buildings in the town include its mediaeval parish church, dedicated to St Edmund, and Victorian clock tower, constructed in 1878. The town is also known as the place where Charles I hid after the Battle of Naseby. In 2004 the town completed a regeneration project on the Market Place, moving the market to the town hall car park. The decorative town sign depicts the crown and arrows of St Edmund with horses to show the importance of the horse fairs in the town's history.

A heritage centre, Discover Downham, opened in a former fire station in 2016. 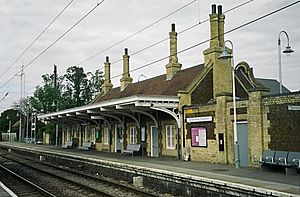 Downham Market railway station, which serves the town, is on the Fen Line from London to King's Lynn. It opened in 1846.

The town’s signal box is one of five rare examples across the region to have been granted Grade II listed status in 2013. The Department for Culture, Media and Sport awarded listed status to 26 signal boxes across the country as part of a joint project between Network Rail and English Heritage to secure the nation’s railway signalling heritage. Downham’s signal box was built in 1881 for the Great Eastern Railway Company but will soon be decommissioned as part of a 30-year modernisation project.

All content from Kiddle encyclopedia articles (including the article images and facts) can be freely used under Attribution-ShareAlike license, unless stated otherwise. Cite this article:
Downham Market Facts for Kids. Kiddle Encyclopedia.