Aglo-Saxon runic inscription on a knife found in the River Thames. This knife is known as Seax of Beagnoth today, it dates form the 9th or 10th century. The inscription ends with the name of the smith (Beagnoth). 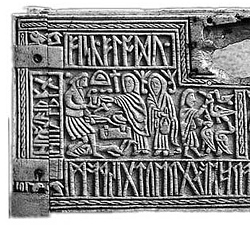 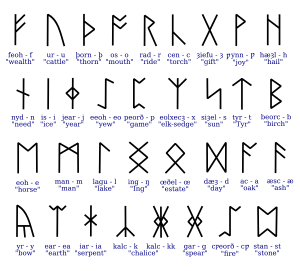 The Anglo-Saxon alphabet is a runic script that was used from the 5th to the 8th century. It extends Elder Futhark from 24 to between 26 and 33 characters. Like the Elder Futhark, it is named after the first few letters in the series: These transliterate to Futhorc in modern English. The script was used to record Old English and Old Frisian. Inscriptions using Futhorc are rare after the 9th century, and completely disappear after the Norman conquest.

All content from Kiddle encyclopedia articles (including the article images and facts) can be freely used under Attribution-ShareAlike license, unless stated otherwise. Cite this article:
Futhorc Facts for Kids. Kiddle Encyclopedia.