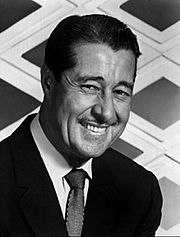 Dominic Felix Amici (May 31, 1908 – December 6, 1993) was an American movie, television, stage, voice, radio actor, and comedian. He was known for his roles as Mortimer Duke in Trading Places and in Coming to America and as Art Selwyn in Cocoon and in Cocoon: The Revenge. He has won an Academy Award and a Volpi Cup.

Ameche was born on May 31, 1908 in Kenosha, Wisconsin; his father was an Italian immigrant and his mother had an Irish-German ancestry. He studied at Marquette University, at Loras College and the University of Wisconsin. Ameche was married to Honore Prendergast from 1932 until her death in 1986. He had four sons and two daughters. Ameche died on December 6, 1993 in his son's house in Scottsdale, Arizona from prostate cancer, aged 85.

All content from Kiddle encyclopedia articles (including the article images and facts) can be freely used under Attribution-ShareAlike license, unless stated otherwise. Cite this article:
Don Ameche Facts for Kids. Kiddle Encyclopedia.