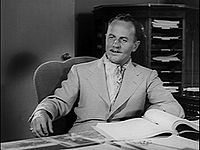 Zanuck was born in Wahoo, Nebraska on September 5, 1902 to Louise (née Torpin) and Frank Zanuck. Zanuck was married to Virginia Fox from 1924 until they separated in 1956. They had three children. One of their children was movie producer Richard D. Zanuck who produced Jaws.

Zanuck died on December 22, 1979 in Palm Springs, California from jaw cancer. He was 77 years old.

All content from Kiddle encyclopedia articles (including the article images and facts) can be freely used under Attribution-ShareAlike license, unless stated otherwise. Cite this article:
Darryl F. Zanuck Facts for Kids. Kiddle Encyclopedia.