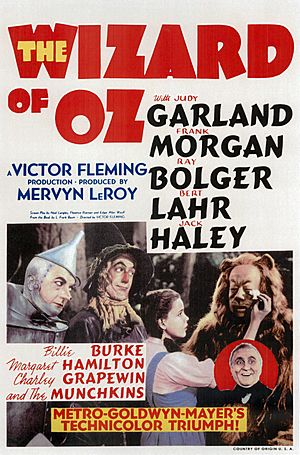 The Wizard of Oz (1939 film) is considered one of the greatest movies of all time.

The musical movie is a movie genre in which several songs sung by the characters are linked into the story line. The songs are used to advance the plot or develop the movie's characters.

The musical movie was a natural development of the stage musical. Typically, the biggest difference between movie and stage musicals is the use of expensive and impressive background scenery which would not be in a theater. Musical movies usually contain elements similar of theater; performers often treat their song and dance numbers as if there is a live audience watching.

All content from Kiddle encyclopedia articles (including the article images and facts) can be freely used under Attribution-ShareAlike license, unless stated otherwise. Cite this article:
Musical movie Facts for Kids. Kiddle Encyclopedia.