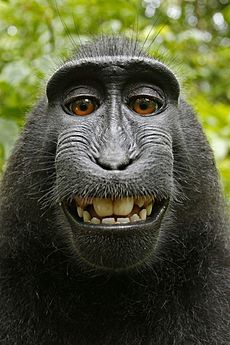 Monkey does selfie: A black crested macaque (Macaca nigra) takes a photo of herself. There is a debate among lawyers who owns the copyright to this image: It is either the monkey, or the owner of the camera that was used.

Copyright infringement (or copyright violation) is the use of material which is covered by copyright law, in a way that violates one of the original copyright owner's "exclusive rights", such as the right to reproduce or perform the copyrighted work, or to make derivative works that build upon it. The slang term bootleg (from the use of boots to smuggle items) is often used to describe illegally copied material.

Some people call illegally copying movies and music, "piracy" or "theft". Richard Stallman says people should not call copying and distribution "piracy", because piracy is robbery with attacking ships, killing and stealing people, and owners of copyright use the word to say that such copying is as evil as piracy. Some courts say that the word "piracy" may be used, but the word "theft" may not be used. When people use the word "piracy" for copyright infringement, it usually means "selling of many copies without permission", but sometimes any "big copyright infringement".

There are a few reasons why people violate copyrights. Copyright infringed goods are usually cheaper than legal ones, because the people distributing them don't need to pay for the copyright. That can make them easier to sell. Normal goods might also not be as useful as copyright infringed ones because of legal limitations.

Copyright laws have tried to keep up with the development of technology, such as radio, television, and the internet. Now many people upload some articles to websites that allow people to read free articles on it without the permission of the author. In this way, people can read many articles easily, but it is illegal. As a result, many authors prosecute the website.

The normal behaviors of copy infringement

Here are the normal behaviors of copy infringement.

The harm of copyright infringement

Piracy goods are usually at low price because they don't need to pay for copyright and carry out research. So it is popular with the people who don't have awareness of copyright. On the surface, it will limit the monopoly of big company. But in fact, it is a means of unfair competition and damages the fair competition pattern. What's more, it will have a bad consequence on the competitiveness of middle or small sized companies.

There are some benefits to society of limiting copyright. One is to expand readership of newspapers and books to a wider section of the public. Newspapers were once relatively expensive, but copies were freely available in coffee houses throughout Europe. The invention of public libraries had the same effect for books. Many great people in the 18th and 19th century came from poor backgrounds. Such people as Michael Faraday (the son of a blacksmith) and Alfred Russel Wallace had no university education, but used libraries to get their knowledge up-to-date. The aim of copyright law is to have a balance between these two sides: the needs of authors and publishers, and the broader needs of society.

1.Well-known writers vs. Baidu On March 15, 2011, HanHan and many other well-known writers prosecuted Baidu Library because it allowed people to read and download their articles for free. They asked Baidu to pay for it but Baidu rejected the compensation.
2.Princeton University Press v. Michigan Document Services (1996) Michigan Document Services was involved in creating packages of study material for the students of the University. A professor supplied the course material and Michigan Document services, a photocopying organization, took photocopies of the material and converted it into a booklet for sale to students at the University. Here was a clause of "Fair use" in this case. The photocopying company could have paid a nominal fee to the University and then used the material. This was available to anyone who wished to use the material. However, the photocopying company paid for only the original and then started making photocopies of the study material. The court considered that it was not "fair use" and penalized the photocopying company.
3.A & M Records vs. Napster (2001) This is one of the most famous cases of copyright infringement related to the music industry. As peer to peer file sharing increased, Napster started a website. This website offered downloads of songs of all genres – new and old. You may know someone who used it. A & M Records brought in a joint copyright infringement case which accused Napster of stealing music and making it available to people worldwide. Before closing the site in 2002, Napster had to settle USD26 million to different recording companies and songwriters. It could have even more if Napster had not apologized and folded the site.Several websites still thrive on offering free music to people who can download it at no cost. As mentioned in our article on "Internet Ethics and Copyright Laws", the music industry faces most copyright infringement cases. The Napster case, though an example of the consequences, still does not act as a deterrent for other music websites that offer free music downloads.

The opinions of the public

As opposed to the writers, many people think it's convenient and cheap to read books and other articles on the internet. They think free articles are good for them. On the other hand, some people think it is illegal to provide free articles download without authors permission. They think the best way to avoid this problem is to pay for reading on the Internet.

In 2014 selfies taken by a crested black macaque seemed to establish a legal precedent, after the Wikimedia Foundation rejected a copyright claim.

The photos had been sold widely by David Slater, a professional nature photographer, whose camera was temporarily carried away by a group of macaques. After the photos were uploaded to Wikipedia, the organisation refused to delete them, claiming "This file is in the public domain, because as the work of a non-human animal, it has no human author in whom copyright is vested.

All content from Kiddle encyclopedia articles (including the article images and facts) can be freely used under Attribution-ShareAlike license, unless stated otherwise. Cite this article:
Copyright infringement Facts for Kids. Kiddle Encyclopedia.