The Woody Guthrie Center is a public museum and archive located in Tulsa, Oklahoma that is dedicated to the life and legacy of American folk musician and singer-songwriter Woody Guthrie. The Center also contains the archives of folk singer, songwriter, and fellow social activist Phil Ochs. 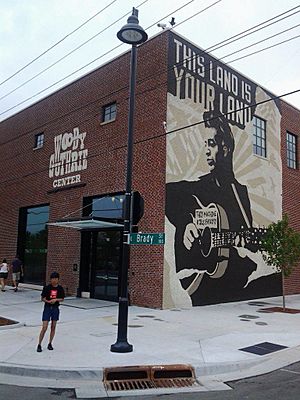 Exterior of Woody Guthrie Center in the Tulsa Arts District

The Woody Guthrie Center is located at 102 East Reconciliation Way in the Tulsa Arts District. It features an interactive museum where the public may view musical instruments used by Guthrie, samples of his original artwork, notebooks and lyrics in his own handwriting, and photographs and historical memorabilia that illustrate his life, music, and political activities. Visitors may also view a short biographical film and listen to samples of his music and that of other artists who were influenced and inspired by Guthrie. Various folk music events are sponsored by the Center.

The Woody Guthrie Archives, which is the world's largest collection of material relating to Guthrie's life, are housed on-site in a climate-controlled facility that is partially visible through windows from the public museum area. The archives contain manuscripts, lyrics, correspondence, artwork, scrapbooks, musical recordings, books, and photographs, and are open to researchers by appointment.

In September 2014, Meegan Lee Ochs announced that she was donating the archives of her father, singer-songwriter Phil Ochs, to the Center. Ochs was heavily influenced by Guthrie, and was a troubadour and social activist in his own right. The donation of notebooks, photographs, videotapes, and other memorabilia is the first collection included in the center from an artist other than Guthrie.

In 2018, the Woody Guthrie Museum announced its plan to host a new program bowl that is intended to offer visitors the opportunity to experience Dust Bowl conditions in the Oklahoma Panhandle during 1934–1938. While wearing a virtual reality headset, they will sit on a replica of a front porch, watching a dust cloud roll in across the prairie to envelop them. The Dust Bowl inspired a number of Guthrie's musical works, and led him to take up the causes of migrant workers and other people disenfranchised by an ecological disaster.

All content from Kiddle encyclopedia articles (including the article images and facts) can be freely used under Attribution-ShareAlike license, unless stated otherwise. Cite this article:
Woody Guthrie Center Facts for Kids. Kiddle Encyclopedia.