Spearman is a city in and county seat of Hansford County, Texas, United States. As of the 2010 census, the city population was 3,368. It is known for its collection of windmills from the J.B. Buchanan windmill collection. 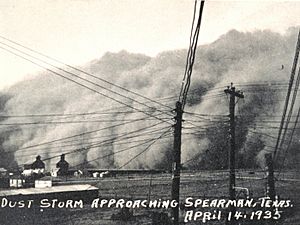 Dust storm approaching Spearman in 1935 during the Dust Bowl.

World War I delayed completion of the railroad from Shattuck, Oklahoma, until October 1919, but Spearman was already thriving; several churches and businesses had moved in from Hansford. Spearman remained the terminus of the railroad until 1931, when the line was extended to Morse and points south. The town was incorporated in 1921 and had thirty businesses, a brick school building, and a population of 1,000 by 1926.

In the November 2011 election, Spearman residents voted to allow the sale of alcoholic beverages within the city limits, making Spearman a "wet" city in an otherwise "dry" county. The law took effect December 15, 2011 and allows the sale of beer and wine in retail establishments such as grocery stores and all liquor sales in a licensed liquor store. Additionally, all alcoholic beverages may now be sold in restaurants who apply for and receive a liquor license.

According to the Köppen Climate Classification system, Spearman has a semi-arid climate, abbreviated "BSk" on climate maps. 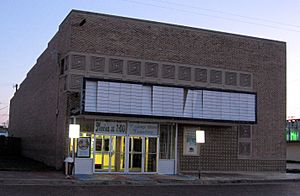 All content from Kiddle encyclopedia articles (including the article images and facts) can be freely used under Attribution-ShareAlike license, unless stated otherwise. Cite this article:
Spearman, Texas Facts for Kids. Kiddle Encyclopedia.