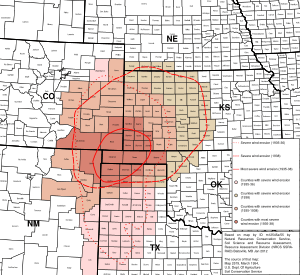 Hansford County is a county located in the U.S. state of Texas. As of the 2020 census, its population was 5,285. Its county seat is Spearman. The county was created in 1876 and organized in 1889. It is named for John M. Hansford, a Texas state congressman and judge.

Artifacts of the Antelope Creek Indian culture abound along the Canadian valley in Hutchinson County. Archaeologists have found 1,300 acres (5.3 km2) of Alibates flint in the area that was used as a quarry for shaping flint tools. Nomadic Plains Apache also camped in this area as did Comanche, Arapaho, Kiowa, and Cheyenne.

In 1873 English brothers James Hamilton Cator and Arthur J. L. (Bob) Cator were sent by their father, British naval officer Captain John Bertie Cator, to Kansas in search of financial opportunity. The brothers soon found their true calling as buffalo hunters and established an outpost along the North Palo Duro Creek. They named this camp Zulu, and it soon became known as Zulu Stockade.

The depletion of the buffalo herds led in part to the ongoing conflict between Indians and settlers. The Second Battle of Adobe Walls took place in neighboring Hutchinson County in 1874 and led to the Red River War of 1874-1875. A group of buffalo hunters attempted a revitalization of Fort Adobe. The Comanches, Cheyenne, Arapaho and Kiowa saw the fort and the decimation of the buffalo herd as a threat to their existence. Comanche medicine man Isa-tai prophesized a victory and immunity to the white man’s bullets in battle. Quanah Parker lead several hundred in a raid on the fort. The buffalo hunters were able to force the Indians into retreat. The Red River War of 1874-1875 was a United States Army campaign to force the removal of Indians in Texas and their relocation to reservations, to open the region to white settlers.

The Texas legislature formed Hansford County in 1876 from Young and Bexar counties. The county was organized in 1889. The town of Hansford became the first county seat.

Early large ranches in Hansford County were spread in neighboring counties as well. By 1890 only twenty-three ranches were in operation in the county. In November 1876 Kansan Thomas Sherman Bugbee established the Quarter Circle T Ranch. The Scissors Ranch was begun in 1878 by William E. Anderson at the Abobe Walls site. The ranch was named after the brand, which looked like a pair of scissors. Coloradan Richard E. McNalty moved to Texas and began the Turkey Track Ranch, which he sold to Charles Wood and Jack Snider in 1881. Scotland born James M. Coburn formed the Hansford Land and Cattle Company. The Quarter Circle T. Ranch and Scissors Ranch were sold to Coburn in 1882. Coburn acquired the Turkey Track Ranch in 1883.

In 1887 Hansford became a stage stop on the old Tascosa-Dodge City Trail.

In 1909 Anders L. Mordt began to bring in Norwegian farmers to settle the northern part of the county, centering on a rural community they named Oslo.

By 1920, 221 farms and ranches had been established in the county. The same year, the North Texas and Santa Fe Railway built into Spearman. By 1929, Spearman became the county seat. Chicago, Rock Island and Gulf Railway built southward in the 1920s leading to Gruver, becoming the second largest town in the county. In 1931 the Santa Fe Railroad connected with the Rock Island, joining Morse.

All content from Kiddle encyclopedia articles (including the article images and facts) can be freely used under Attribution-ShareAlike license, unless stated otherwise. Cite this article:
Hansford County, Texas Facts for Kids. Kiddle Encyclopedia.