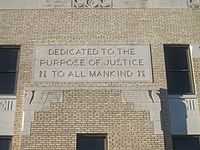 The Ochiltree County Courthouse contains the inscription on one side, "Dedicated to the Purpose of Justice to All Mankind." Click to read. 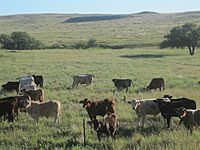 Ochiltree County ( ok-ƏL-tree) is a county located in the U.S. state of Texas. As of the 2020 census, its population was 10,015. The county seat is Perryton. The county was created in 1876 and organized in 1889. and is named for William Beck Ochiltree, who was an attorney general of the Republic of Texas. It was previously one of 30 prohibition or entirely dry counties in the state of Texas.

Ochiltree County is the setting for the Hank the Cowdog series of children's books, in the unincorporated city of Twitchell.

The Allen campus of Frank Phillips College is located in Perryton.

All content from Kiddle encyclopedia articles (including the article images and facts) can be freely used under Attribution-ShareAlike license, unless stated otherwise. Cite this article:
Ochiltree County, Texas Facts for Kids. Kiddle Encyclopedia.