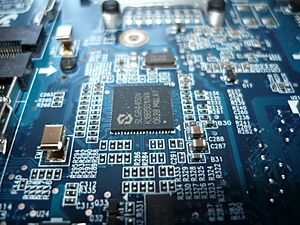 Engineers must study the sciences of physics and mathematics as these help to get both qualitative and quantitative descriptions of how such systems will work. Today most engineering work involves the use of computers and it is commonplace to use computer-aided technologies when designing electronics systems.

All content from Kiddle encyclopedia articles (including the article images and facts) can be freely used under Attribution-ShareAlike license, unless stated otherwise. Cite this article:
Electronic engineering Facts for Kids. Kiddle Encyclopedia.