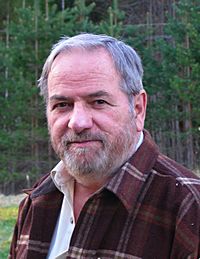 John Deely (April 26, 1942 – January 7, 2017) was an American philosopher and semiotician. He was a Professor of Philosophy at Saint Vincent College and Seminary in Latrobe, Pennsylvania. He was at the Center for Thomistic Studies of the University of St. Thomas in Houston, Texas. He was born in Chicago, Illinois.

All content from Kiddle encyclopedia articles (including the article images and facts) can be freely used under Attribution-ShareAlike license, unless stated otherwise. Cite this article:
John Deely Facts for Kids. Kiddle Encyclopedia.