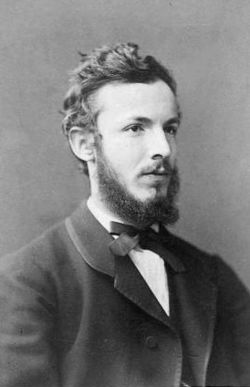 Cantor was born in St Petersburg, Russia. His father had a Jewish-Danish, his mother an Austrian background. His father was a Protestant. He was a rich merchant. His mother was a Roman Catholic. She was very artistic. When his father became ill in 1856 the family moved to Frankfurt. Georg went to private schools and then to gymnasien in Darmstadt and Wiesbaden. He soon showed that he was brilliant at maths. His father wanted him to be an engineer but Georg persuaded him to let him study mathematics. He spent a short time studying at the University of Zürich, but soon went to Berlin where he studied physics, philosophy and mathematics. He was very influenced by the teaching of Weierstrass, Kummer and Kronecker, who were later to become his enemies. He wrote a doctoral thesis in which he said that asking questions was more important than finding the answers. He was talking about a problem that Carl Friedrich Gauss had left unanswered.

Cantor taught for a time at a girls’ school in Berlin, then he became a lecturer in Halle where he remained for the rest of his life. He became full professor there in 1879. Cantor worked on the theory of numbers and then on trigonometric series, starting with ideas that had been developed by Bernhard Riemann on complex variables. He sent a paper on algebraic numbers to be published in Crelle's Journal, but Kronecker was against it. However, Dedekind supported Cantor, and eventually the article was published. This article showed that Cantor was a great mathematician.

When his father died in 1863 he had enough money to build a house for his wife and five children.

Cantor thought that infinite numbers really existed, and used ideas from ancient and medieval philosophy to prove his point. Kronecker disagreed with him. He thought that only integers existed. Kronecker said that “God made integers and all the rest is the work of man”. Kronecker stopped Cantor from being offered a professorship in Berlin, a position he ought to have had since he was one of the greatest mathematicians in the world. Cantor stayed at Halle and continued to work into his old age, although he often suffered from fits of depression. He often lost his temper, but he was also a very kind man. He always gave encouragement to young mathematicians with new ideas. He did not want them to suffer like he had because of older mathematicians who felt threatened by new ideas. A lot of Cantor’s work led eventually to what is called “new mathematics” in schools today.

Cantor died in a mental hospital in Halle on 6 January 1918.

All content from Kiddle encyclopedia articles (including the article images and facts) can be freely used under Attribution-ShareAlike license, unless stated otherwise. Cite this article:
Georg Cantor Facts for Kids. Kiddle Encyclopedia.